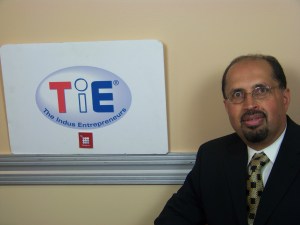 The Indus Entrepreneurs Conference (TiEcon) kicked off today with near-record attendance of more than 4,000 people in spite of the economic slowdown.

The conference for entrepreneurs is in its 16th year and has become a powerhouse networking event for South Asian investors and tech entrepreneurs with strong ties to mainstream tech leaders.

This year, as I walked through the crowded halls, I could overhear conversations in the hallway, catching whispers of “we haven’t pitched anyone” or  “our valuation  is higher.”

“Even in harder times, people still want to come and hear inspirational stories from well-known entrepreneurs,” said Ajay Chopra, (pictured) co-chair of the conference and recently named general partner at Trinity Ventures. “We try very hard to get the big names here, and we get a lot of help from our successful members who know people at senior levels.”

The theme to many of the talks is “entrepreneurship unbounded,” Chopra said. That means that the domains are global, not just local, and they stretch across industries from solar to social networking.

Beyond the talks with tech luminaries, the conference has crowded exhibits and networking events. About 40 venture capitalists were scheduled to participate in “speed dating” presentations from about 200 entrepreneurs. For a few minutes at a time, the entrepreneurs could pitch VCs who had a specific interest in certain kinds of companies. About 40 percent of the start-ups are from consumer web companies, Chopra said. Another 20 percent are software-as-a-service companies, with the remainder from all industries. Last year, NextPlane was one of the dating game companies that received funding as a result of its participation.

As a VC himself, Chopra said that seeing so many companies at once can be efficient. Last year, he looked at 350 companies but invested in only two.

Some tips: McClure suggested companies built a Web site prototype quickly and then start soliciting feedback, all the while remaining quiet about publicity until the bugs are worked out. He also said that soliciting feedback is much more valuable than staying in stealth mode. Kolluri agreed, saying that companies in stealth often feel insecure about their competitive advantage over rivals. McClure also said that start-ups can get a lot of free publicity by staging public fights with their would-be rivals. (It’s not the nicest tactic, but it gets attention).

Vishal Sikka, the chief technology officer of software giant SAP, said in an interview at the conference that he finds TiEcon invaluable as both a South Asian and a tech executive. SAP has more than 4,000 of its 50,000 employees in Bangalore, India.

“The ability to attract influencers here has been growing over the years, along with the growth of the South Asian technology economy over the past two decades,” Sikka said.

The conference is staged by 400 volunteers. The overall TiE group has 46 chapters in 11 countries with a membership that tops 12,000.

The event, which costs $299, is being held all day Friday and Saturday at the Santa Clara Convention Center.