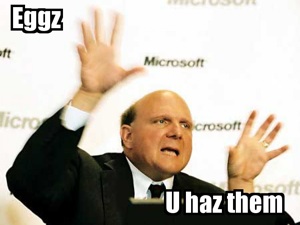 First, he walked away from his $45 billion deal to buy Yahoo when it became clear that the two sides would not be able to reach an amicable agreement — and that a hostile takeover might get too complicated. Then he was forced to listen as many people around the web called for his job. Then he was taken to school by billionaire investor Carl Icahn on how a hostile takeover should be executed. And then today he was apparently rejected by Facebook on a full purchase of the social network. Now he’s getting eggs thrown at him.

While he was giving a speech at a Hungarian University, one member of the audience began yelling at Ballmer for stealing Hungarian taxpayer money, and then the eggs starting flying. Ballmer quickly darted behind a desk for cover.

Perhaps worse is that everyone in the audience was either laughing or seemingly indifferent about the action as the protestor stood there for several seconds before being asked to leave (no security even rushed to stop him).

For his part, Ballmer took it in stride and laughed it off. Something tells me though that if Yahoo signs a search advertising deal with Google — and not Microsoft — he won’t be laughing.