When it comes to their audiences, most blogs have a knowledge gap: while Google Analytics is wonderful for determining the sources and volume of their traffic, it tells them very little about the people that constitute it.

Expensive traffic measurement services like ComScore and Hitwise, which analyze audiences by recruiting large groups of people and following their surfing patterns, work well for sites with tens of millions of visitors, but their utility starts to wane for smaller sites. There’s simply not much Comscore or Hitwise can tell these sites about their readership demographics, and this information can be highly useful when negotiating CPMs.

As a result, they’re forced (as VentureBeat did last year) to construct their own survey, post a blog to try to get their readers to fill them out, and do the analysis themselves. Crowd Science, a company based in both Silicon Valley and Toronto, wants to take the pain out of this process. The idea is simple: add a line of code to your blog, fill in some details about the topics you write about, and Crowd Science will take care of the rest.

Theorizing that a blog with a loyal following will have a number of readers willing to participate out of the kindness of their hearts (and not out of a desire to win an iPod) Crowd Science uses text ads to solicit readers for an eight to fourteen question demographic survey. Instead of bombarding every visitor with these ads (and thus sucking up valuable space for paid ads), the solicitations only show up occasionally. Crowd Science CEO, John Martin, says that for blogs with sufficiently engaged readers, this formula will be garner the 40-50 per month participants necessary for statistically relevant results.

Assuming Martin is right, the information that comes out of these surveys is much more accurate and valuable than the relatively rough demographic data one can get from a service like Quantcast. And unlike to the somewhat comparable company, Vizu, which simply deploys rudimentary one-question polls, Crowd Science has carefully constructed surveys that avoid creating bias and get comprehensive data with as few questions as possible. Crowd Science also customizes the survey to a blog’s content, so along with the typical questions about gender, income, race, etc, a survey for a blog about, say, video games will include questions about which consoles the readers own, what games they like to buy and how often. The service makes it easy to chop up the data along any variable and, importantly, package and display it for the sake of advertisers.

But therein lies a number of rubs: Martin says that his primary targets are middle-tail blogs that actually make real money from advertising. But in reality, there isn’t a huge number of these. In order for the product to matter for the bottom line, a blog owner must be selling his or her own ads, and there are even fewer of those sorts of bloggers. To scale, Crowd Science will have to find a way to plug its data into ad servers and automatically improve targeting, which is far from a mean feat.

Further, Crowd Science’s process requires 40-50 new participants every month and offers no incentive, and while it’s probably true a lively blog has a number of willing readers, their numbers may be finite as well.

But if it can find a way to improve targeting automatically and keep its data fresh, Crowd Science has the potential to carve itself a profitable niche.

The company raised $2 million from Granite Ventures at the end of last year. 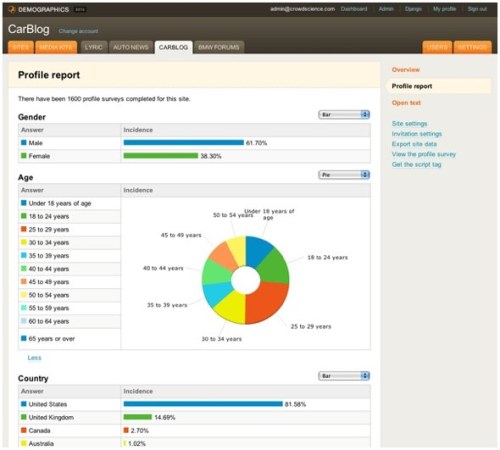