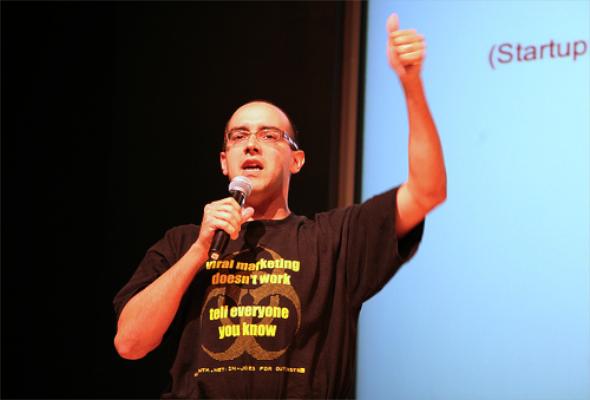 Dave McClure: You can’t spend much time socializing in the Silicon Valley web scene and not know who this sometimes irreverent, garish-T-shirt-clad geek is. The entrepreneur/angel investor/social media enthusiast has been around since 1994: He’s founded and sold a company, been part of the PayPal “mafia,” and most recently fastened on to the social network application craze — teaching a Stanford class and running a conference, both of which study how to grow the beasts.

Possibly because he’s spent so much time studying how people network online and offline, McClure knows how to leverage his personal brand. Now, he’s founding a technology “night school for entrepreneurs” of sorts, called Startup2Startup. Once a month, he’s bringing together “rookie” first-time entrepreneurs to have dinner and network with experienced peers, investors and others. The main goal, he says, is to help institutionalize how-to knowledge of entrepreneurialism that he and others have accumulated the hard way. He’s financing the events through ticket sales ($90 a pop) and through paying sponsors, including VC firms Mohr Davidow Ventures and Charles River Ventures and social gaming company Social Gaming Network.

The fact that YouTube founder Chad Hurley will be the speaker at this month’s dinner should give you an idea of the weight McClure can pull in the Valley. McClure and Hurley were both early employees at Paypal, the online payment company that has produced a seminal group of investors and entrepreneurs that have since spawned (besides YouTube) VC firm the Founders Fund, local search company Yelp and widget maker Slide.

And, McClure seems to be pulling the dinners off so far. I attended the first one, in May. It brought together a lot of great people even for a first-time event, on a night that had a lot of other things happening. If my experience is an indicator, there were lots of good conversations. An investor in address book organizer Plaxo, which recently sold to Comcast, told me that both Facebook and Google had each expressed strong interest in buying the company (which vindicates these reports), and that the actual sale price was between $140 and $160 million.

At the Startup2Startup dinners, moderators lead group discussions at dinner tables, with rookies being distributed between tables so they can get into deeper conversations with potential mentors. McClure, a blogger who has published detailed analyses on topics like how to measure startup success, how to do a successful elevator pitch, and how to take on vertical markets, also plans to have each dinner include presentations with similar how-to style information. The first dinner featured repeat entrepreneur Mike Cassidy discussing how to create a business and launch a product in three months (video here ).

Of course, the technology seed fund/support network/incubator concept didn’t end up faring to well in the nineties — many incubators and their ilk never produced hits and eventually went out of business after the market soured. But the concept has seen a resurgence. For example, Y Combinator, a seed-stage venture firm, offers new companies seed funding and a vibrant community of fellow technology entrepreneurs. Another, Plug and Play, located in Sunnyvale and Redwood City, has facilities, networking events and sometimes seed funding for promising young companies (Disclosures: VentureBeat has received a small amount of funding from Plug and Play’s investment vehicle, Amidzad. Also, I was part of a startup that received funding from Y Combinator).

While McClure says he’s in part inspired by Y Combinator, his main models are nineties-era networking events like Round Zero and Garage.com. Maybe more similar to those programs than to the other modern incubator-like incarnations, Startup2Startup is about getting a lot of great people in the same room and letting them take it from there.

[Photo of McClure by Scott Beale of Laughing Squid.]