Xumii, a mobile service that lets you access feeds of activity from other social networks and services, is launching a private testing version (beta) next month.

When I first looked at it, I was skeptical. I’ve already written that large, web-based social networks such as Mypace and Facebook have moved to offer their services on mobile, and have momentum. It’s a little late for new players to enter the mobile social market.

Specifically, MySpace and Facebook are closing deals with carriers at a furious pace, I’m told. Carriers are attracted by their large web audiences and the promising growth of their mobile web sites and applications. I also hear that mobile-only networks (there are many of them), are hoping to cut deals in which a carrier will include them on their decks, but are getting asked, “What makes you different from MySpace/Facebook?” Many don’t have an answer.

Still, carriers have approached Xumii (a rare thing for a mobile startup), according to company chief executive Jennifer Zanich. She says they see Xumii as “an open version of Yahoo One Connect,” a popular mobile service. 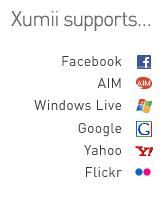 Yahoo One Connect has gained a lot of acclaim from the industry because it lets you access a single service through which you can access other services. On most mobile devices you can’t run more than one app at a time, so there’s a bonus to having a central way to manage many of them.

Features Xumii promises to offer in the private beta include the following:

* All contacts from all social communities in the one place/list
* Presence & Availability – Status updates from mobile phone, social networks and IMs
* Ability for IM and offline communications that are persistent and threaded (history of chat)
* Groups – a microblogging shared private space one can invite others to
* Share rich graphics, photos, music, video, interactive apps (widgets)
* Walls –Personal Mobile Message Board – post messages, photos, interactive applications

Xumii, in some sense, appears to be joining a rather long and ever-growing list of mobile social networks. Some of them are showing amazing off-deck traction, getting into billions of page impressions per month. It’s a new twist on two services I’ve previously looked at: Bluepulse and Zannel.

One aspect of Xumii’s discussions with carriers include a revenue share of the data plan (even rarer), and transactions, Zannich disclosed. Other carriers are considering a subscription model (like Loopt has done, offering a fee per month per subscriber). The names of the carriers were not disclosed as the discussions are still pending.

Mind you, the carrier interest is an “accident” — Zanich is very firm in portraying Xumii as a consumer-orientated company, not a white-label service. We are curious to see whether users will show the same interest when the private beta is launched at the end of the month.

The company has received $4.3 million from CM Capital and Southern Cross Venture Partners, in November 2007.

[Xumii is a nominee for best mobile company at MobileBeat2008, VentureBeat’s conference on July 24]