The latest niche social network to launch, Capzles, is a “social storytelling” site that lets you frame picture, video, documents and other media.

It lets you place personal media online — in the form of a timeline. The site’s slick interface and design stand out. Built entirely in Flash, the company’s website is about navigation and placement  than about storage.

Co-founder Chris Anderson — who shares his name with, but who is not be confused with both the editor-in-chief of Wired and the curator of the TED conference — says he got the idea for Capzles when his Polish grandfather died. His family asked him to digitize and organize the photos, letters and other material left from his grandfather’s life.

That initial task led to the idea of placing media in a progressive chronological format, which users navigate left-to-right. Any particular “moment” they’re interested in viewing can be picked out, or all the moments can be seen in sequence.

While Anderson’s initial use revolved around a family history, the average user he expects to attract has a more typical objective. Web-based travelogues are a prime category, along with interactive histories of events like weddings and political campaigns — one of the most popular storylines on the beta Capzles site has been a timeline of Barack Obama’s political career. 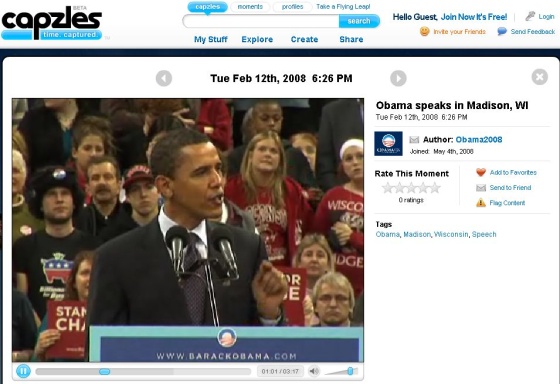 Anderson says he’s aiming to break at least a million users by marketing Capzles on college campuses around the country, as well as working with musicians, music events like Vans Warped Tour, and popular travel sites. Capzles will also offer its users widgets that they can place on their homepage, or other social networks like Facebook, and in its next release will allow users to connect to websites with APIs to automatically import their data.

And to turn a profit, Capzles will try to sell marketers on the idea of using the site for their campaigns. Besides the chance to get users really engaged with a brand’s storline, Anderson argues that a navigable Flash interface is the perfect place for marketers to polish their message.

The company is working on a separate analytics product that can tell clients exactly which moments users are interested in, and how they interact with them. “The great thing about Flash is that you can track things you can’t in other environments,” Anderson says. The site plans to charge advertisers for exportable “conversion widgets”, as well as for placement on the internal search engine.

As is often the case with niche ideas, I’m a bit concerned that Capzles sounds more like feature than a distinct network, unless it can somehow convince users to switch away from Flickr, Photobucket and other sites. On the plus side, the company’s interface is reminiscent of visual search engines like SearchMe and Viewzi, which may mean it’s at the forefront of a new standard.

On the negative, Capzles has plenty of competition from existing and upcoming sites. OurStory has offered a similar media timeline social network for years, and another company AllofMe launched last year, aiming to you store your life’s media in a timeline. Then there are “funware” startups like Rmbr, and others like SnapJot and Tabblo. Too many sharing options won’t be conducive to users herding to a single site. And the case for attracting advertising is thin — for all that they’re officially designated “creative”, marketers are generally wary of sinking money into untested ventures.

Capzles has so far raised an undisclosed first round of over $1 million. The Culver City, Calif. company is demo’ing today at Launch: Silicon Valley in Mountain View.