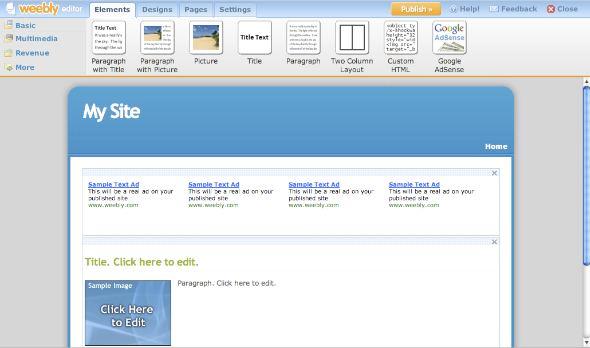 Weebly, a simple web-page creator, has seen some decent growth since it launched almost two years ago, currently gaining around 10,000 new users per week. The San Francisco-based company has already been trying to make it easier for anyone to create simple sites — now, it is trying to help its users make money from the traffic they get on their pages.

Using the Google AdSense API, which is generally limited web properties with “significant traction,” any Weebly user can now drag and drop Adsense ad widgets onto their page without having to deal with code snippets, up-front registration, or bumbling their way to get a proper size and format. Weebly facilitates the whole process, although eventually its users will have to register personal and financial information with Google.

The pro accounts (which is not required to run Google’s Adsense) cost five dollars a month – or four dollars a month with the company’s two-year package — gives users the ability to go above and beyond the basic web page creation. Pro account users will get a number of additional features. They’ll be able to create password-protected pages, something very useful for teachers, co-founder David Rusenko tells me. Pro users will be able to remove or customize the Weebly logo at the bottom of the page — a feature certainly appealing to those wishing to present a more professional look. Pro users will also be able to own and administer ten websites per account, have access to support services; and receive upgrades in file size limit from 5MB to 100MB per file (although neither pro or regular accounts have an overall storage cap).

The first, puts it in the realms of competitors SiteKreator and Synthasite by venturing into the freemium model; offer a core product, free, which 90 to 99% of users take advantage of, while charging the power users a monthly fee for more advanced features.

Weebly plans to split the revenue 50/50 with its web page creators, which number over 625,000 to date, although the team isn’t sure how many users will take advantage of the new feature.

One obvious question is why hasn’t Weebly competitor Google Page Creator integrated AdSense into its own web-creation tools? Rusenko says that not one single developer at Google is working on Google pages right now — they all either quit or were re-assigned — which makes it seem that the giant is content to let young startups like Weebly continue to grow.