I’m indecisive when it comes to picking restaurants to eat at. Annoyingly so, I’ve been told. I simply don’t care the majority of the time; I’ll eat anything. Urbanspoon’s new native iPhone application may be the perfect tool for me.

The app is extremely simple. You open it, it detects your location then you shake your iPhone. This causes a series of sliders to spin around like a slot machine until they land with a recommendation on where to go. You don’t like the pick? Simply shake it again. (Watch the video demo at the bottom of the post.) 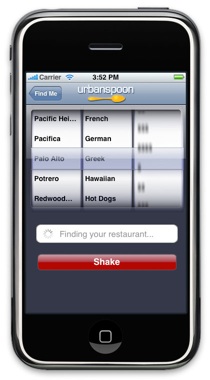 While this may seem silly, the underlying idea is one that I’ve been harping on a lot lately: the rise of location on mobile devices. Utilizing the new iPhone 3G’s GPS chip and Wi-Fi/Cell tower triangulation, Urbanspoon’s app knows exactly where you are without any input required from you.

It’s like a Magic 8 Ball, but for food recommendations and on a much more technologically advanced device.

The idea behind the Urbanspoon app was to create “something fun and toy-like — a practical app that felt like a game,” found Ethan Lowry told us. It’s a fun way to utilize the restaurant reviews from local newspapers, bloggers and users that the site has been collecting.

Urbanspoon currently operates in 41 cities across the country. The site sees close to a million monthly unique visitors according to Lowry.

The Urbanspoon iPhone application will be available when the App Store launches on July 11. It will be a free download.