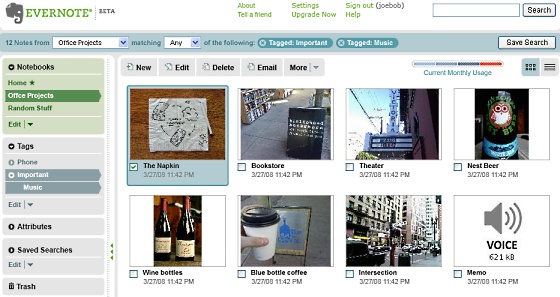 Evernote, a company that calls its service an “external brain,” is launching a public test version today.

The service lets you store pictures, notes, screen clippings and other “memories” for easy browsing and retrieval.

Evernote is trying to solve is information overload problem, similar to other data storage schemes, including the semantics startup Twine. Evernote’s service is most useful to a busy person whose memory isn’t up to the task of remembering every little detail — a group that includes most business people and students, not to mention journalists.

Take a picture of a business card, and you can email it or upload it onto Evernote and retrieve the details at will, via a search utilizing the company’s image-recognition technology. A page of hand-written notes or a magazine article could likewise go in, as well as business receipts, emails or clips from web pages. I reviewed the company’s now-defunct alpha version last year, when it only worked on Windows PCs, but it now also works on Macs, has a web version, and integrates with various smartphones, including the iPhone.

For most people who aren’t David Allen addicts, keeping their scattered bits of information together is well nigh impossible, so Evernote has a lot to offer. As for how well it’s living up to the task, Evernote still hasn’t graduated past being a cool tool for niche audiences — but it has the potential to be much more.

There are various smaller hurdles for Evernote to overcome, like improving its search, which ran into errors with spacing in words and in searching for multiple words when I used it. The bigger hurdle is in figuring out how to tie into other services. For example, if I take a picture of a business card and email it to Evernote, I want it to be added to my address book. But Evernote doesn’t transcribe text yet, which would be the first step toward moving the information over. Nor does it allow enough options for automatic organization, which could require the power of another service, like Twine.

The answer to some of these problems is Evernote’s upcoming API, which opens up the service to outside developers wanting to build on top of it. CEO Phil Libin says that’s due within weeks, with a couple initial partners in the works, including a blogging platform. An API could also potentially solve the transcription problem, through more powerful software or cheap human transcription like voice recognition startup ReQall uses, although it would be best if the company did it itself.

In the meantime, Evernote is building a strong fanbase that finds it useful, including lawyers, teachers and bloggers. Where the company intended to let 10,000 people into its beta, that number ballooned to 125,000 through invites. Libin said he’s seen some odd uses of the software, too — including one user who said they were using it to store up their sins, the better to remember them in confession.

Evernote is also near to closing its second round of funding. The company took $6 million in 2006, and was on the hunt for up to twice that last time I spoke with them, although Libin was mum on the amount today. It’s based in Sunnyvale, Calif.