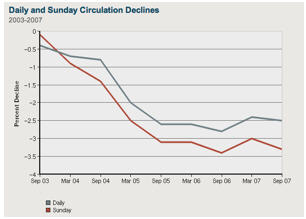 The San Jose Mercury News, the newspaper with circulation in the south part of the San Francisco Bay Area, has announced nine more layoffs in the newsroom by the end of the week, and dozens in its other departments.

This continues a remarkable downward spiral for the Merc, the paper where I worked for six years before leaving in 2006. It’s part of a decline in the entire industry, long known for its fat, double-digit profit margins. The industry wasn’t doing well even during the economic expansion period of the last few years. With the housing crisis gutting them of even more revenue, Wall Street is hitting these newspaper companies even harder. I remember the shock a few years ago, when things first hit that we might be slipping out of the double-digit margin range. Now newspapers are lucky to be in the black.

About 19 of the top 50 U.S. newspapers are in the red, the Mercury News’ vice president Dave Butler told employees yesterday, but “we are not among them,” he noted. The Mercury News will end the fiscal year June 30 with a profit, publisher Mac Tully said. It has now gone through several rounds of layoffs, and they’ll likely just keep cutting costs. The margins in the industry have gone for good.