The company’s clients include Dell, AT&T, Sony PlayStation, Univision, and PayPal — all businesses with large user communities and heavy customer service and product support needs. Lithium’s community sites are designed to help these clients streamline the interaction with their customers and improve brand loyalty. To get an idea of how the sites function, take a look at the one Lithium designed for Dell. With features such as Dell forums where customers can engage with each other to answer support questions and share tips, the main point is to build brand loyalty in a two-way conversation with consumers.

The idea is to use best practices to stir up people like Jeff Stenski, a Dell customer who has voluntarily spent the equivalent of 141 days of his time over the years and posted more than 22,000 answers to technical support questions on Dell’s community web site. Stenski’s answers have been viewed more than a million times, saving Dell more than $1 million, according to Lithium. That prompted Forrester Research analysts Charlene Li and Josh Bernoff to call out Lithium in their social networking book, “Groundswell: Winning in a World Transformed by Social Technologies.” 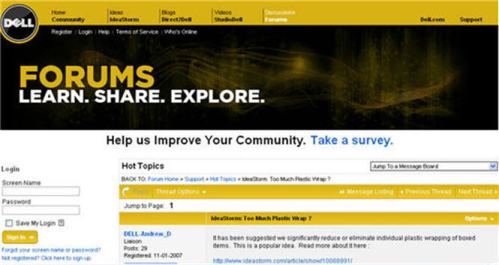 A number of startups have moved to deliver similar social networking communities to the enterprise market. Marc Andreessen’s Ning social-networking platform can be used to build enterprise communities. Liveworld, Igloo, HiveLive and KickApps also promise companies that they can build thriving social networks. But Lithium has attempted to set itself apart by using game-like motivators such as leaderboards, rewards, reputations and profiles.

We mentioned the trend of using game-like features in non-game applications in our earlier story about Funware. In the Dell IdeaStorm voting, the most-frequent contributors can get “iSquared powers,” meaning they get ten times the voting power of other community members when it comes to selecting which of the IdeaStorm product ideas are the best.

“We’re managing sites for companies that collectively get a billion page views a month,” said chief executive Lyle Fong. “Our job is to get those one percent of users who are hardcore fans and turn them into the company’s biggest evangelists.”

Lyle Fong, by the way, is the brother of Dennis “Thresh” Fong, a professional video game player who won a Ferrari at age 20 when he was crowned the world’s best.

The boyish-looking Fong brothers of Los Altos are legendary in video games. Dennis dropped out of UC Berkeley to play video games for a living. He picked up honors as the world’s best “Doom” and “Quake” player. He was one of the first people to actually make video gaming a profession, winning big cash prizes and the Ferrari.

Dennis co-founded another company, GX Media, with Lyle. At first, they were selling gaming computers out of a dorm room. In 1997, they founded Gamers.com, a site that offered news and community forums for hardcore gamers, as well as game fan site FiringSquad.com, started with their other brother, Bryant. They raised $11 million in venture financing from CMGI in 1999 and lived the good life. Gamers.com even threw a party at the Playboy Mansion during an E3 show. 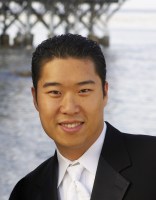 In 2001, Ziff-Davis bought Gamers.com and GX Media spun out Lithium Technologies under Lyle. Dennis went on to found Xfire, an instant-messenger service for gamers which was purchased by Viacom’s MTV for $102 million. Dennis is now head of the startup Raptr, a gamers social networking client.

Lithium is based in Emeryville, Calif. This second round of funding was led by Benchmark Capital. The cash will help the company expand its marketing and product development as it faces new kinds of competitors. The company previously raised a $9 million round from Shasta Ventures and Emergence Capital Partners in 2007.