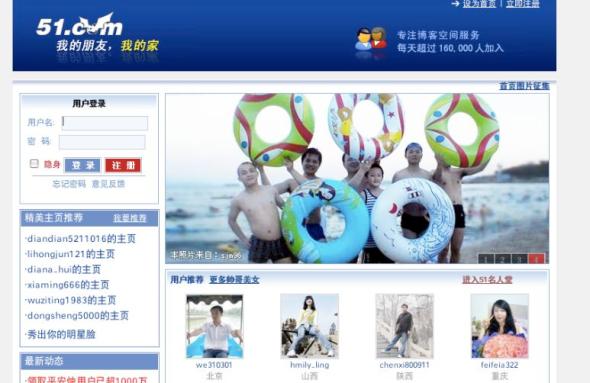 Scores of cities in China have more than a million people, and 51.com has beat out its rival social networks to be the most popular in many of them, even if it’s not the most popular in cultural centers like Shanghai and Beijing. It faces both international rivals looking to enter China — including Friendster, Facebook and MySpace — as well as domestic startup rivals like Xiaonei, and social networking features on Tencent’s Qzone.

But, the company’s popularity in what some call “second and third-tier” cities in China contributes to its 31.5 million monthly unique visitors and more than 120 million total users. So it’s only a little smaller than Facebook’s monthly visitors in the US.

51.com isn’t sitting still as more social networks eye the growing Chinese market. When I wrote about the company’s $50 million funding in May, it said it was looking at offering a developer platform, as many of its international competitors were.

Today, the company has announced the name of its new backer: Giant Interactive Group, a publicly-traded Chinese game development company. This is a strategic move by Giant, the rough Chinese equivalent of game maker Electronic Arts buying a large amount of stock in Facebook or MySpace. More from Giant chairman and chief executive, Yuzhu Shi:

“[W]e are positioning Giant at the forefront of the trend towards increasing convergence between online games and social networking communities. Enhancing the community-building and social networking aspects of our online games has been one of our key strategic initiatives, most recently highlighted by the launch of our expansion pack Neighboring Friends for ZT Online. The combination of Giant’s online game platform and expertise at free-to-play game monetization with 51.com‘s social networking business provides a unique opportunity to broaden our player base, expand our community-building opportunities, reinforce user stickiness, and extend the lifecycles of our games.