A new service lauded as the latest Twitter destroyer launched today, Identi.ca. It has everything you could want in a Twitter-clone — namely, it looks a lot like Twitter and, at least for the time being, works. It also has Jabber IM support, OpenID support and most interestingly it appears that it’s going to allow for the federated use of its service. This means that anyone will be able to build their own version of Identi.ca, so if one goes down, you can just try another one. Marshall Kirkpatrick laid out all the details on ReadWriteWeb this morning (and has an awesome Twitter Fail Whale shirt too boot).

In theory this sounds great. Imagine if, when Twitter goes down, we could all just move over to another version of it and keep the conversation going. This is something that blogger and RSS pioneer Dave Winer has been asking for for a long time. Obviously, he’s happy with this service so far. 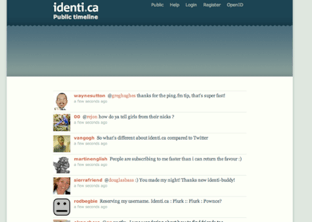 But hold on just one second. Go back and read the first paragraph again.

As much as we all complain about Twitter’s inadequacies, it still has the single most important feature of any service: a large, active user base.

That’s why I’ve said in the past that the only thing that can kill Twitter is Twitter itself. If the service keeps failing to work, people will leave not out of choice, but out of necessity. I don’t think that’s going to happen because I think Twitter will right its ship before we get to that point.

Sure, some of the so-called “Twitterati,” those elite tech users and early-adopters are already making the move over to Identi.ca — but do you know how I know they are? They’re still tweeting about it!

Don’t get me wrong, Identi.ca may be better than Twitter. It certainly sounds like its openness will allow for it to be more reliable, but one could argue that Pownce is better than Twitter too. So why is Twitter still absolutely dominating the market (see the chart above)? Again, it’s the users.

Naturally, I’m on Identi.ca, so if you want to follow me you can do so here. But I’d rather you follow me on Twitter or FriendFeed because at the end of the day we’re going to keep using those anyway.

As one Identi.ca user told me: “I’m just here to claim my username…I’ll be running back to Twitter!” Exactly.