Tucked inside a ground-floor office on Hamilton Ave. in Palo Alto, Calif., a stone’s throw from social network comany Facebook, the company’s eight employees are feverishly building applications solely to work on the iPhone.

Never mind that the Apple has sold a mere six million iPhones to date, compared to Nokia’s 400 million handsets. Tapulous’ chief executive Bart Decrem believes the iPhone’s interface –featuring a multi-touch full screen and now 3G speed — is sparking a revolution akin to what Microsoft Windows did to DOS on the PC. 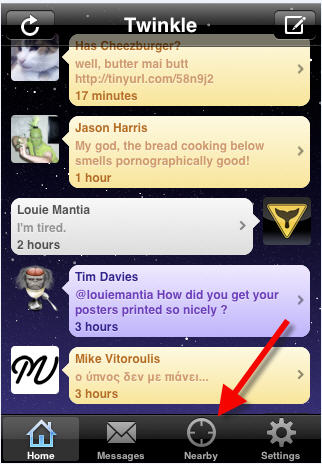 He’s pulled together a team of developers to build out a slew of applications designed to be social at their core, believing this will help “viral” distribution. He’s vague on the details, but says he wants applications to feature personal profiles that will allow for social networking across the applications.

Just as RockYou and Slide exploited the Facebook platform by producing scores of applications to see what would stick, Tapulous wants to be the equivalent for the iPhone. It has developed three applications to launch in time for the opening of the iPhone App Store, scheduled for tomorrow, and has scores more apps in waiting.

Decrem (pictured below, left) is a great salesman. Previously, he cofounded Flock, the browser, and he pitched it so well in the Valley that it became over hyped and never lived up to its promise. Flock is still alive and kicking, but Decrem has moved on. He’s trying to dampen his salesmanship this time around, he concedes, but it’s only minutes into the conversation before his enthusiasm picks up and he speaks in superlatives: “This will be bigger than the PC revolution,” he says of the iPhone, citing a statement made by John Doerr, a partner at venture firm Kleiner Perkins. He also cites a Piper Jaffray analyst prediction that there will be 90 million Apple smartphones in use by the end of 2009. He cofounded the company with Andrew Lacy and Mike Lee. He’s hired developers like Sean Heber, who became a legend of sorts when he built 30 applications for the iPhone in 30 days. 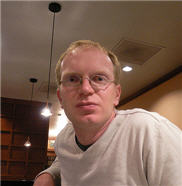 On the surface, Twinkle (screenshot above, and more at bottom) is the most intriguing of Tapulous’ applications. It’s a Twitter client, meaning users access the popular micro-messaging product Twitter on the app, pulling and pushing in tweets (Twitter messages) just like they would on Twitter. But Twinkle will support photos, and it’s more flexible than rival Twitter client Twitteriffic because it lets people message with other services besides Twitter. Twinkle also lets people see which users are located close to them (by tapping into the iPhone’s location technology).

Since launching in March (for “jailbroken” iPhones — phones where users have bypassed carrier restrictions to downloaded applications), Twinkle has had 80,000 people download it, Decrem says. To be sure, a lot of other startups also aim to become the location-based social networking application of choice for the iPhone. These include Loopt (featured prominently on the front page of the iPhone App Store site), and Whrrl. But these other companies may be trying to do too much. Loopt lets you find out information about people and what is going on in their neighborhood. Decrem, by contrast, is betting on simplicity. Twinkle is focused exclusively on communication. It also leverages the social graph — tapping your friendship relationships in hopes of increasing virality. 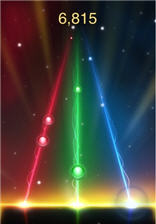 Decrem is actually more excited about a second application, called Tap Tap Revenge, a clone of the game Tap Tap Revolution. Decrem says Tap Tap Revenge is already used by 700,000 users on jailbroken iPhones. This is an astounding number, considering that it’s more than a tenth of the entire number of phones sold. However, the application does not feature profile information, so it doesn’t have the same social underpinnings.

Friend Book, the third app to be released Friday, is an address book application. It lets you do a pretty cool “handshake” — you shake your iPhones next to each other, and your contact information is exchanged.

I asked Decrem how he hopes to make money with the company. He said Apple’s iTunes product has created a culture of willingness to pay. Phone users have also shown they are prepared to pay for ringtones and wallpaper. The key is virality, he says. He learned a tough lesson at Flock, which is that it’s a lot more difficult to distribute a product in the marketplace than he’d expected.

Tapulous has raised $1.8 million in angel funding, including from Andy Bechtolsheim, Marc Benioff

. He said one investor originally expressed skepticism, saying that SMS is where all the money on mobile phones is being made. However, Decrem won him over, arguing that exclusive focus on the iPhone’s interface will give Tabulous the edge on the vibrant iPhone.

Still, with thousands of applications bound to be launching on Friday to compete with Tapulous, this is early in the game, and a risky one to be in. 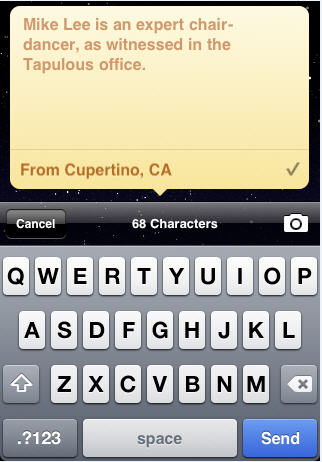 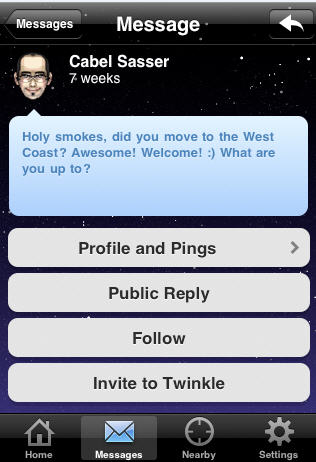 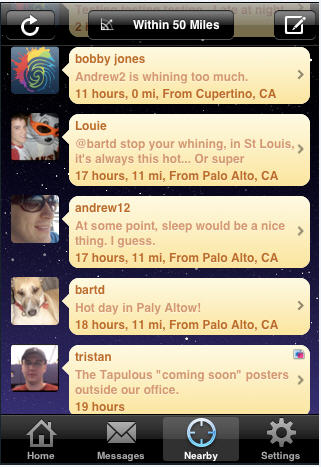