Whereas most consumers were searching for price points of the first generation iPhone around its release last year, this year people want to know all about the device itself and its 3G aspect, according to new data taken in June by analytical company Hitwise.

The data, as shown in the chart below, shows that a mere five percent of searches about the iPhone were looking for information on its pricing. By comparison, 35 percent were searching for something related to the “new release” of the device. 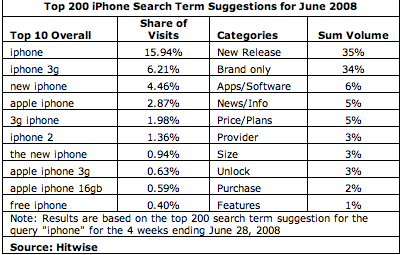 Other data shows a decrease in the percentage of wealthy people (those making over $150,000 a year) in the United States searching for the device. That will tend to happen when you sell a device for $199 versus the original’s $599 price tag.

There was also a slight increase among women and those over the age of 55 searching for the new iPhone, but all in all the demographics didn’t change that much.

The most interesting part of the the study is the conclusion drawn by Hitwise research director Heather Dougherty: “Apple and AT&T have succeeded in turning the ‘3G’ moniker into an almost proprietary name associated with the new iPhone – judging from the most recent search data.”

That seems true. You don’t hear much talk about the term “3G” in this country anymore without it being related to the iPhone. 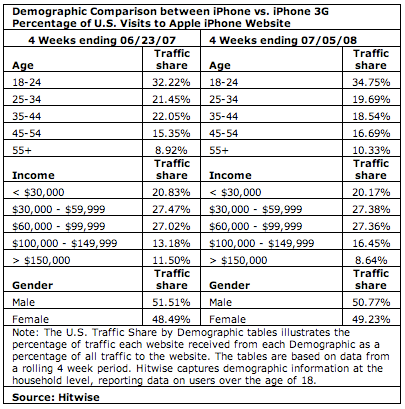