Note: I’ve substantially updated this post since it first went up earlier today. 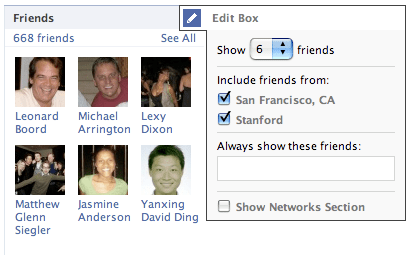 Facebook has been experimenting with a ground-up redesign of its profile since early this year, and it has made this work-in-progress available for public testing since May. The redesign, long available on the test site, was mostly non-functional at first. But the company has been gradually turning on old features and including new ones. You can try them out here.

[Update: Facebook has more news for developers. The new profile will also include the ability to create popup windows for applications, a way for users to send notifications to each other even if they aren’t friends, and a lot more. See the company’s post here.]

I personally like the new design, although it will no doubt be at least a little complicated to get most existing users to buy into it at first. The bigger question is how third-party application developers will be affected.

One example of a new feature is “top friends,” that lets you select the number of friends you want displayed on your main profile page and choose which friends you want to be displayed. It’s similar to third-party Facebook applications offered by Slide and others, which also let you display your favorite friends, although MySpace and other rival networks have offered this feature for some time. While it’s easy to assume that Facebook is trying to take Slide’s business for itself, that’s maybe reading too much into it, as social network-focused blogger Nick O’Neill notes. Facebook isn’t going to stop experimenting with features just because it has a platform that lets third parties build their own.

Facebook, meanwhile, is hosting a conference for developers later this month, where it will be going over how these profile changes are going to impact applications. Meanwhile, Inside Facebook has more thoughts here, here and here, while O’Neill’s AllFacebook has more here.