Hitwise: Digg has been sending more traffic to mainstream media web sites lately — Take a look at the graph below, and read what the web research company has to say, here. Allen Stern at CenterNetworks recently published his own report anecdotally noticing the changes; he speculates that Digg may be looking to sell to a mainstream news company. 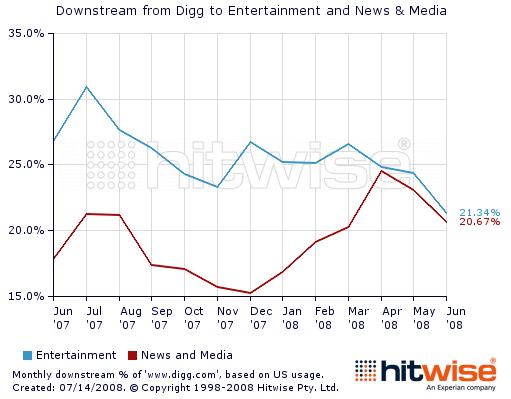 San Francisco government computer system compromised — A rogue IT employee, currently cooling his heels in jail, illegally created his own master password that gave him exclusive access to the city’s new multi-million dollar computer system. He still hasn’t turned over the password, and top administrators haven’t figured it out on their own. Files he currently has access to include city payroll files, official emails — and importantly for him, as he’s getting arraigned today — confidential law enforcement documents and jail inmate bookings (“What? Show me the documentation that I was ever in jail.”). The Chronicle has a closer look at this man-made disaster.

As real species go extinct, millions of virtual ones are springing up on Spore — First, the bad news: Researchers announced today that many more species may face extinction than previously thought, based on newly-revised calculations. Now, the good news: Spore, a forthcoming video game that recently launched a way for users to create their own virtual creatures, announced today that so far, users have made millions of new species. Spore, a game that will let you evolve a single creature into a galaxy-spanning race, is due out this fall.

Blog software WordPress gets useful upgrade — New features include a way to track changes across blog-post revisions and a way to easily post media to WordPress from other sites. The company has more details on these new features and others. Or watch the video. 1. http://v.wordpress.com/mARhRBcT/fmt_std

Business networking site LinkedIn launches ads to target particular subsets of its users — The automated service lets anybody create and pay for their own text ads that run within the site. Read the company’s blog post on the ads for more detail.