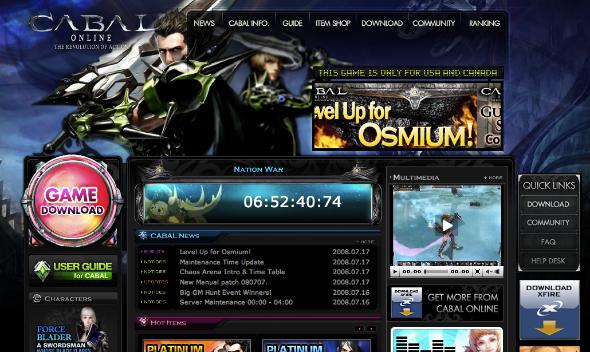 The sale of virtual goods drives revenue for many game companies in Asia, but that trend is still getting off the ground in the United States. OGPlanet is licensing popular games in Korea and modifying them for the U.S. market, betting that the trend is going to be big here.

The translated games are graphics-intensive role-playing games, such as Cabal (homepage screenshot above).

So far, things are going pretty good, the company says. “The percentage of buyers of [virtual goods] is a lot lower than in Asia,” it tells VentureWire, which reports that the company is profitable and has raised an undisclosed third round of funding from DFJ Athena.

“[B]ut another significant difference with Asia is once [Americans] become a buyer, they buy a lot more than Asian buyers.” Ah, yes. American consumerism kicking into action.

El Segundo-based OGPlanet, owned by Gamefactory, previously raised an undisclosed amount of second-round funding from LG Venture Investments and M Ventures, according to the report.

OGPlanet raised a first round of venture funding from a number of prominent game and media executives, including Richard Wolpert, former President of Disney Online and a strategic advisor to RealNetworks and Accel Partners; Mark Surfas, formerly founder and CEO of GameSpy; Peter Levin, CEO of BellRock Media; and Andrew Wright, former Vice President of RealArcade and currently CEO of SmileBox. Seattle-based RealNetworks is also an investor.