Facebook and MySpace get most of the press, but another social network out there is growing much faster than either: hi5. The social network is the world’s fastest growing among the top-10 networks in that category, according to June data from analytics firm comScore.

Hi5 grew 79 percent in the first half of 2008 — twice as fast as any of the other top social networks. The site’s unique visitors grew from 31.4 million in December 2007 to 56.4 million in June 2008. Interestingly, hi5, which is headquartered in San Francisco, Calif., says that over 80 percent of its users are outside of the U.S.

Of course, it’s easier to grow faster when you’re not as large as MySpace or Facebook. Facebook has still had very impressive growth recently as well, while MySpace seems to be lagging a bit.

Facebook’s annual f8 conference is currently going on in San Francisco. Our own Eric Eldon is live-blogging it. 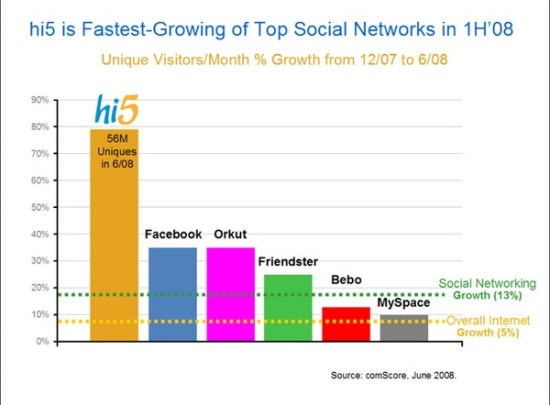