Two companies have been tapped as the first recipients of an investment from a program called RechargeIT, run by Google’s philanthropic arm: Aptera Motors, a Carlsbad, Calif. company that is gearing up to sell a futuristic three-wheeled car; and ActaCell, a battery company that hopes to help make electric cars both cheap and safe. 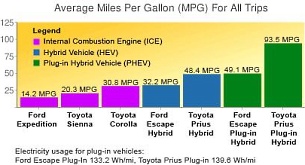 Each company is receiving $2.75 million from Google.org (although ActaCell also has other new investors). The announcement comes as RechargeIT is releasing the results of a plug-in hybrid vehicle (PHEV) test showing that a modified Prius can get over 90 miles per gallon.

The 230+ miles-per-gallon Aptera has received plenty of attention over the past few months, and a post here on VentureBeat asking whether readers would drive the odd-looking vehicle continues to get responses indicating that yes, quite a few people are interested in the $30,000 car. The Google investment is also only part of a total $24 million round that should bring the company closer to its production goals.

However, ActaCell is appearing for the first time with this investment. The company, spun out of the University of Texas at Austin and based in the same city, is working on a lithium-ion battery technology that it thinks might

be able to change the dynamics of the electric car market. At the moment, li-ion is by far the preferable battery type in terms of performance, but it is also far more expensive than competing technologies like nickel-metal hydride (NiMH).

Outside of the funding details, CEO Bill Ott didn’t want to say much about the technology when I spoke to him. However, he was willing to admit that there are a few broad problems that ActaCell wants to tackle. One of the top priorities is safety — li-ion batteries are famous for exploding or catching on fire in laptops. Cars, obviously, need to operate without either of those things happening.

Just as important is the cost. Ott suggested that a major component of cost is in the materials that go into li-ion batteries, which often include “precious commodities” like cobalt and nickel. “If you want to build a successful company,” he told me, “you have to have a low-cost material.” Also important is extending the life of the battery so that it needs to be replaced less often.

The company plans on releasing the details of initial tests of its batteries later this year, and Ott says that they should be commercializing the technology by 2010, around the time they’ll need another round of funding.

Major competitors to a technology like ActaCell include A123, a li-ion maker that is loaded with cash and appears to be contemplating an IPO, and secretive EEStor, a maker of so-called “hypercapacitors” that entered a partnership with defense giant Lockheed Martin this year. EEStor, by the way, hates talking to press, but a new mystery blogger has been talking about the company; if you’re curious about their progress, try checking it out.

The total investment taken by ActaCell was for $5.85 million. The round was actually led by DFJ Mercury, with participation from Google.org, Applied Ventures, and Good Energies.