BitGravity is a bit player in the world of moving video through the web. But it believes in rounding up some powerful partners.

The Burlingame, Calif.-based company is announcing today that it has raised $2.5 million from media dealmaker Allen & Co. and Blake Krikorian, cofounder and CEO of Sling Media, the maker of the popular Sling Box. (Sling Media is now owned by EchoStar.) Krikorian will join the BitGravity board.

BitGravity has created a technology that is good at moving video from one place to another on the Internet. That job is the domain of “content delivery network” companies such as Akamai. But Perry Wu, chief executive of BitGravity, believes his company is more efficient at moving high-definition video and live multimedia on the web. Most CDNs were created a decade ago, in the era of long delays, slow modems, and download errors. Those frustrations are no longer acceptable for today’s Internet users.

BitGravity’s BitCast technology tries to eliminate some of the overhead costs associated with routing and processing. It uses a 10-gigabit-per-second network, allowing for larger Internet packet sizes and fewer data bottlenecks. But no special clients or servers are necessary for customers. Among its features are the ability to enable live broadcasting on the Internet, secure delivery of content, and faster delivery times.

While it is a smaller player, BitGravity signed up Tata Communications as a partner and it now has hundreds of big customers using its services. Among the sites using BitGravity are CollegeHumor.com, Revision 3, Tom Green, and Steve Hatch Racing. 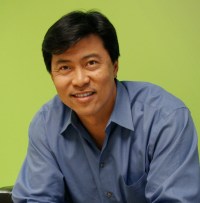 Founded in 2006, BitGravity has been bootstrapped until now. Perry Wu, a former general partner at ComVentures, said that he believed in holding out as long as possible before accepting outside money. But this new investors will help the money achieve its business goals, Wu said. The company has 50 employees and Wu hopes to double that by the end of the year.

(He called this strategy “The Marshmallow Test” in a guest editorial for VentureBeat. In the story, a researcher put a marshmallow in front a child and told the kid not to eat it or he or she wouldn’t get the second marshmallow. He did this 400 times and tracked the results. Those who held out for the second marshmallow turned out to have much better school grades and careers. By extension, Wu believes that entrepreneurs who wait as long as possible to raise money will fare better and get a higher valuation).

The company has been generating revenue since its launch in 2007. Wu said that the company’s executives, including cofounder Barrett Lyon, didn’t take salaries for 18 months. Besides big companies such as Akamai, there are smaller rivals such as Andolis, which is trying to use “peer-to-peer” technology to create a low-cost CDN.

Did Wu take the first marshmallow by raising money? “I took a nibble,” he said. “I followed my own advice.”