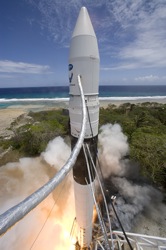 Space Exploration Technology Corp., the company created by PayPal co-founder Elon Musk and better-known as SpaceX, has raised $20 million from The Founders Fund.

This is the first time SpaceX has raised outside funding, according to the Wall Street Journal; Musk previously invested $100 million of his own money. The news follows right behind the Hawthorne, Calif. company’s third attempted launch. The launch ended in failure last weekend, when the first-stage engine didn’t separate as required. The Falcon 1 (pictured left) carried three satellites — one for the U.S. Department of Defense, two for NASA — as well as the remains of 208 people who paid to have their remains shot into space, including astronaut Gordon Cooper and actor James Doohan, who played Scotty on Star Trek.

But Musk says a fourth launch is “almost ready” to go, and that the new funding is just a “precautionary measure.” Musk already has a connection with The Founders Fund, which was established by his PayPal co-founders Peter Thiel, Luke Nosek and Ken Howery. The Journal reports that SpaceX also held unsuccessful talks with aerospace company Northrop Grumman about a possible investment.

SpaceX has big goals — to make space travel, including missions to other planets, more reliable and affordable by a factor of 10. With three failed launches, it clearly has a way to go on when it comes to reliability, but apparently it’s not unusual to see these kinds of problems during the early stages of a rocket’s developent. SpaceX already has plans for 11 missions.