Last fall, Benjaming Ling was recruited out of Google to help lead the Facebook developer platform product marketing team. But he’s planning to leave Facebook within the next couple of weeks, I’ve heard from sources within Facebook. The reasons aren’t clear. The company, which has confirmed the news, is only publicly saying that he’s leaving for other career opportunities, via a written statement.

The platform product marketing team is under the purview of Elliot Schrage, who himself was recruited out of the public policy arm of Google this spring to become Facebook’s executive in charge of communications and public policy.

That’s just one of many organizational changes the company has been going through as it continues to grow — it’s now the largest social network in the world — and as it continues looking for revenue streams worth billions of dollars. The company is still hunting for a new vice president of engineering and a vice president of product. Company founder and chief executive Mark Zuckerberg has final say over these areas in the meantime, sources say.

All sorts of obvious questions spring to mind. Can this departure be explained as a company-wide conflicts between the old guard of mainly engineering-focused early employees versus the new, business-focused executives? A number of other early, engineering-focused leaders have left in recent months, which on its face lends credence to that theory.

Inside sources say this isn’t so. Other executives, like Matt Cohler and Adam D’Angelo, have reportedly left for more personal reasons, while the engineering culture remains prevalent across the company. The platform team itself is still dominated by technical types.

[Update: Kara Swisher also has the story, and spoke with Ling. From her article:

Ling would not be specific as to his reasons for leaving the hot social network, but he said he was pursuing “another opportunity.”

He added that “Facebook is a tremendous organization and I would not leave it if it were not for a great opportunity.”]

At the f8 conference last month, Ling himself helped introduce new components of the platform (see photo, below) including a “Great Apps” program for the most meaningful applications, a new funding contest for promising new applications, and other incentive-focused measures. 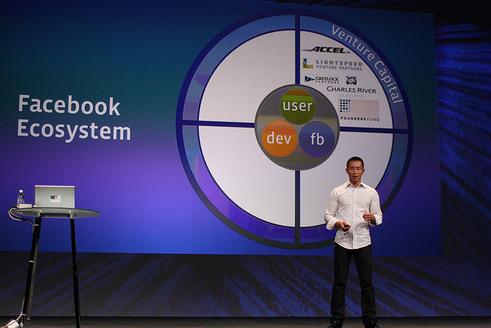 The earlier versions of the platform have been laissez-faire — or “anarchy” in the words of one inside source — the new measure are intended to ensure that developers don’t abuse users through things like spammy invites. Of course, that philosophical shift — from what some developers refer to as “small government” to the new “big government” — is very real.

But it’s unlikely that Ling is leaving because of such philosophical differences, given his involvement in the latest changes; one source suggests its the flux within the organization, and the competing, talented executives, that are contributing to the organization changes, and departures.

Still, Ling’s departure must hurt the company to some degree. “If I could pick any three people in Silicon Valley to start a company,” one source says, “I’d pick Cohler, D’Angelo and Ling.”

Facebook confirms that Ben Ling will be leaving the company in the coming weeks to pursue other interests. We wish him well and appreciate his great contributions to the early success of Facebook Platform. Platform is poised for continued growth and success and the company is on track to deliver the range of major initiatives announced last month at f8, including Facebook Connect, fbFund and the Great Apps and Application Verification programs. Each of these programs have a strong team of professionals focused on attracting the best developers to Facebook Platform, helping developers succeed on Platform, and helping users find and enjoy great applications on Facebook.