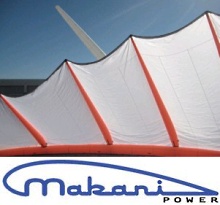 Stealth startup Makani Power, an Alameda, Calif.-based wind energy company, has secured $5 million in second round funding from returning investor Google.org. The 24-member firm, which is playing its plans very close to the vest, has only revealed that it is building huge wing-shaped kites to harness the energy from high-altitude wind.

By some estimates, all the energy contained in wind could satisfy our needs 100-fold, with most coming from high-altitude wind. Tapping into just 1 percent of this energy could meet most of our current needs. In a recent demonstration, scientists from the Netherlands’ Delft University were able to produce 10 kilowatts of electricity by flying a 10-square meter kite attached to a generator.

A kite farm, consisting of multiple kites flying at altitudes of around 800 meters, could generate up to 100 megawatts — enough to power 100,000 homes — they say. Wubbo Ockels, the project’s leader, believes the technology could be commercially viable in as little as 5 years if the funding is there.

Makani also aims to capture that small slice of global high-altitude wind, which it says would be sufficient to supply the world’s current energy needs. The kites capturing the wind could fly as high as 10 kilometers into the sky (a touch over six miles).

As a competitor, Makani has Kite Gen, a Milan, Italy-based startup, has developed a theoretical design for a system that would fly 12 sets of lines with four 500-square meter kites on each. It says the system could produce up to 1 gigawatt of power, roughly equivalent to the amount generated by a coal-fired plant. There’s also Magenn, which has a lighter-than-air floating turbine, although it will only go up 600 to 1,000 feet.

Makani previously raised $10 million from Google.org in late 2006 and expects its current round to raise upwards of $20 million.