Thanks to the internet, selling tickets on the secondary ticket market — the act formerly known as scalping — has gone legit. EBay bought the market pioneer, StubHub, for $310 million. TicketMaster dropped $265 million to get its hands on TicketsNow, and top-tier VC firm Kleiner Perkins led a $26 million investment in RazorGator back in 2005. All of these companies make money charging sellers a 15 percent commission on the tickets they sell.

However, LiveStub, a just-launched start-up out of Toronto and Chicago, hopes to take a blowtorch to all of them. The company has decided to do away with commissions entirely and make the exchange of tickets free. Morten Lund, an early investor in Skype, has invested an undisclosed amount of angel funding to get the company off the ground.

LiveStub’s site has a few advantages other than its price. Unlike its counterparts, it does not require users to register, making a one-time transaction significantly faster. Second, despite the occasional flaw, LiveStub’s interface is generally simpler and cleaner. It’s just a search bar and a list of tickets, which you can filter based on popularity, the date the tickets were added and how soon the event is coming up. Its process is also somewhat more transparent. When you search for tickets, LiveStub produces a graph that lets you see the event’s average ticket price or popularity over time. Another nice feature lets you quickly find out how much your ticket is worth.

[Update: LiveStub may not be as transparent as it claims. As some readers pointed out in the comments below, the company has pre-populated its entire site with ticket data taken directly from TicketsNow and, in fact, the entire sales transaction goes through TicketsNow’s system. As one commenter says, this means that LiveStub is currently not much different than any of the many ticket search engines, and in fact has fewer sources than they do. However, when you search LiveStub, the interface suggests that LiveStub itself is the source (see screenshot below). CEO Michael Hershfield has told me that seeding LiveStub with TicketNow’s data was necessary to make the site useful early on and that it was not his intention to mislead anyone.] 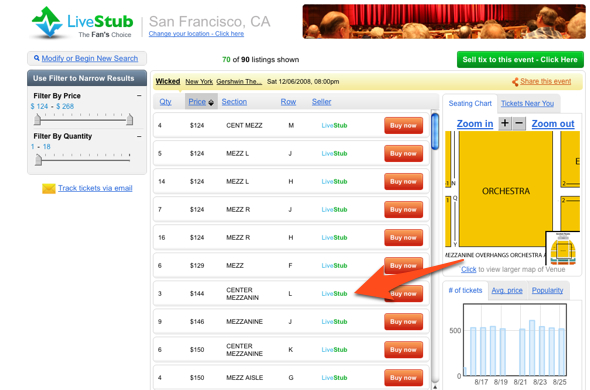 But all of these features are easily imitable. The zero-commission is the only differentiator that truly threatens the competition, but it certainly seems like a big threat. Despite the fact that the site launched today, I was able to find tickets to Ice Cube’s show tomorrow on LiveStub but not on StubHub, and they were available on TicketsNow for the same price. After an unscientific few searches across all of the sites, it seems that ticket prices were lower on LiveStub, but not always and not by much.

Assuming LiveStub gets significant traction — and if the market likes cheaper services, it should — consistently lower prices and possibly even greater availability should become the norm. That being said, StubHub and TicketsNow have existing relationships with brokers and sports teams, plus they have the power of huge companies behind them. Craigslist also has a strong position, too, but I don’t expect most of these advantages to last.

The lingering question, of course, is whether or not LiveStub’s model will sustain itself. The company says at some point in the future, it will add premium services for power sellers and targeted advertising to buyers, but only after it has achieved critical mass, but this plan seemed a bit vague.

As it happens, Morten Lund seems to have a penchant for companies offering zero-commission transactions in industries dominated by commissions. He previously invested in Zecco, which charges nothing for stock trades and has gone on to raise $35 million over two rounds.