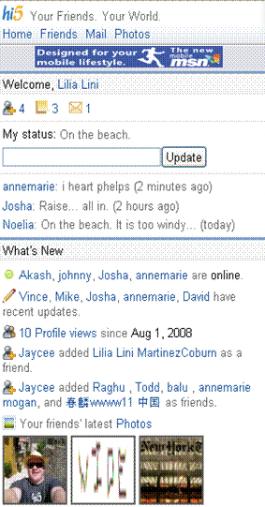 Hi5, one of the larger social networks in the world after Facebook and MySpace, is launching a mobile version of its site in 26 languages. Point your mobile browser to m.hi5.com to check it out, or take a look at the screenshot.

The mobile version, as you can see from the screenshot, offers some but not all of the features found on the web site. The mobile features include the ability to send and receive messages in real time, see status updates, browse friends profiles, comment on items and see friend requests and add friends. It also shows you who else is online and using the mobile app at the moment, useful in case you want to call them.

Moving into mobile is important for Hi5 because 80 percent of its users are outside of the US, in non-English speaking countries like Peru, Portugal, Romania and Thailand. These regions, especially Spanish-speaking Latin America, where hi5 is largest, are seeing increasing mobile data usage. This move also helps head off competition. Hi5 has been one of the fastest-growing social networks in the world this year, according to comScore, growing from 31.4 million monthly active users last December to 56 million users in June. Facebook, notably, has also gotten some serious traction in Latin America after it released its Spanish version this spring.

San Francisco-based Hi5 itself made a point of translating its web version into Spanish years ago, a move it says helps explain why it — and not rivals — grew more quickly in certain countries. Today, it believes it now offers the most mobile translations of any large social network (although I haven’t verified that).

The company doesn’t disclose how many people use the mobile browser to access the Web site, but it says the number is high.
The company also used a combination of user input and professional translation to create the mobile versions, similar to what Facebook did with its web versions. In the future, it plans to simultaneously introduce web and mobile versions of additional languages it decides to offer.

Hi5 also points out that it’s less “Silicon Valley-centric” than some rivals. Facebook, for example, keeps coming out with new versions of its iPhone app (which I, being admittedly Silicon Valley-centric, like). Most of hi5’s users have phones made by Nokia, LG, Samsung and Motorola, phones that have long been popular around the world, in markets the iPhone has yet to penetrate.

In sum, this is a timely bid for hi5 to build out its mobile presence, especially to solidify its popularity with its web users.