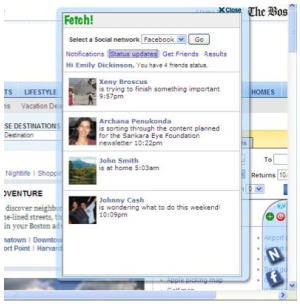 Vysr, developer of RoamAbout browser plugin that allows users to access their favorite web content from any site, has fortified its product by adding OpenSocial applications to the fold. The widget, designed for Firefox and IE, adds a sidebar to the bottom of every browser window from which you can launch a smaller window showing the latest from sites like YouTube, Twitter and Flickr.

Before now, the only accessible web apps available through the plugin had to be built specifically for Vysr. By incorporating OpenSocial, the platform will benefit from the contributions of many more developers who see the value of taking their products portable. For example, the RoamAbout widget allows them to display ads through the apps they create, and even charge a subscription or purchase fee.

Users simply select which social networks they would like to access, and revelant applications will be displayed. Most OpenSocial apps capitalize on social networking to allow users to stay up to date with others in their networks, and to share information quickly and easily. Vysr’s adoption of these apps will bolster the company’s mission to create a more user-centric browsing experience— essentially freeing popular services and apps from the confines of specific sites, and making them available in a central, easily-accessible location. Vysr has even established an OpenSocial registry as a reference for developers interested in contributing apps well-suited to a more user-centric web.

Another boon for users is that Vysr’s RoamAbout widget also supports Facebook, which will streamline development of network-specific apps, and provide new ways for developers to create Facebook apps in conjunction with the RoamAbout browser widget. This will give both users and developers more options and greater exposure across the web.

The original Vysr widget emerged on the scene earlier this year in competition with a broadening scope of social-networking plugins like Minggl and browsers like Flock. Since the launch, Vysr has endeavored to promote customizable and interoperable web experiences. Today, with the added punch of OpenSocial, it has taken a step toward becoming a third-party application marketplace in its own right, much like Hi5 and others, bridging the distribution gap for developers, and providing new interactive experiences for even casual users.