Tokoni, a site where users can share their stories in the form of notes, photos and videos, is formally launching today. Think of it as a YouTube for stories, or as a broader version of medical support sites like Trusera and DailyStrength, but not limited to health.

It is founded by a husband-and-wife team of eBay and Skype executives.

Places for sharing stories about your daily life already exist. They’re called “blogs.” But Tokoni co-founder Alex Kazim, formerly president of Skype, argues that blogs don’t work for everyone. After all, blogging on your own site can sometimes feel like you’re shouting into a vacuum, and it can be a lot of work to maintain — that’s why the web is littered with abandoned blogs (including my own). Kazim’s solution? Build a community where people can find and comment on other stories, and only post when and if they feel like it.

The closest existing competitor to Tokoni may be simple blogging tool Vox.com, which also boasts various group and sharing features. But Vox.com is built around blogs, rather than individual stories, which Kazim says makes community-building harder.

Kazim and his wife Mary Lou Song, the number three employee at eBay, founded Tokoni almost a year ago, but they’ve spent a year allowing the community to grow and tweaking the design before today’s formal launch. The site includes such features as the ability to create collections of your favorite stories (see screenshot below), a visual search tool called a “bubble browser” that allows users to create links between different stories, fan pages for different story-writers and “tokens” so users can give feedback on stories like “thanks for sharing” and “been there.” 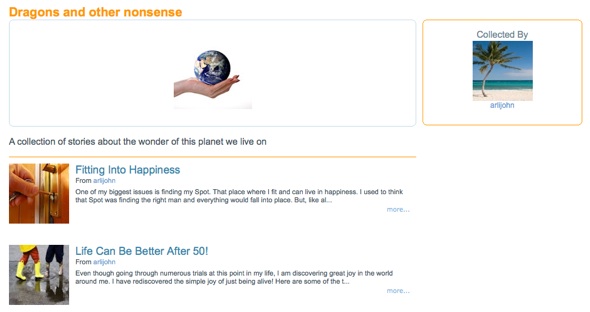 Tokoni has less than 1,000 users (and presumably many more visitors who don’t post anything), and it may be rather late in the game to launch another blogging/social media service. The Cupertino, Calif.-based startup isn’t just competing with the sites I already mentioned, but also with the note-sharing features on big social networks like Facebook. On the other hand, the Tokoni site is very smartly designed. The company also provided the infrastructure and community management so members of the political group WomenCount can share their stories on a cobranded site, and similar collaborations with other groups could be another source of revenue.

The company raised an angel round of undisclosed size last year, with backers including eBay founder Pierre Omidyar. Kazim says he plans to seek a venture round in 2009.