Today, LP33.tv, the company formerly known as MyAWOL, goes live with its intensely ambitious site for unsigned musicians. The site centers around a video player that features original music videos, short band documentaries and news clips, all produced by LP33’s team. There are rapid edits, hipster rockers, punky pop princesses, and cooler-than-thou VJs, all hearkening back to the MTV and VH1 glory days of yore.

LP33’s goal is to create a platform for finding and promoting unsigned musical talent. The package, which includes artists’ bios and posts from “influential” bloggers, has greater scope and depth than that of competitor, Topspin Media, which has similar goals but less impressive flair. The whole thing, which we first glimpsed this summer, has many of the makings of terrific execution. 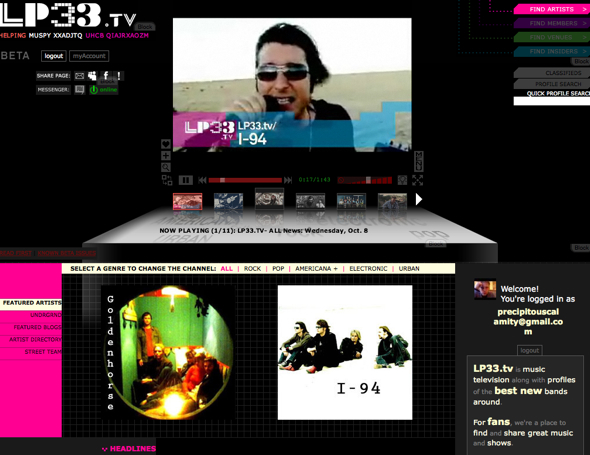 Unfortunately, it is also missing some of them. Most of the musicians, especially the electronica artist, Paul Kwitek and country singer Austin Collins, have a spark, but none triggered my “good lord, that was dope” reflex. While the video player itself does a great job drawing the eye, the rest of the interface isn’t nearly as pretty. The colors are garish, with way too many obnoxious pinks and purples. When you scroll down, the photographs of the featured artists jut past the elements to the left and right, causing the site’s symmetry to fall apart, and navigating from artist to artist and takes way too many clicks. Lastly, the VJs, awkwardly trying hard to emit attitude, do not seem ready for prime time.

In some ways, these faults are forgivable, even charming: This is the underground version of MySpace Music, after all. But in other ways, they are not: The contrasts between the videos’ high production values and the site’s sloppier hiccups are jarring. These are all addressable issues, but if LP33 wants to be a destination site in this day and age — especially one that deigns to stand against the machine that is Fox Interactive Media — it has to do more than a few things right.

It has to do a lot of things, and do them all brilliantly.