If you want the most useful information possible to appear in response to a search, why not allow information portals like the community news aggregator Digg and travel site Kayak add it themselves? Search Wikia is opening itself up to allow companies to do just that, by adding their own widget to search results.

Wikia was started by Wikipedia cofounder Jimmy Wales in 2006 to try to take monetary advantage of the user contributions that drove the non-profit online encyclopedia to fame. The answer to the question above is “Because you can’t trust other companies with your service,” but Wales is betting on his users to weed out the bad widgets and support the helpful ones.

The company is launching with 14 partners, including the two above and others like AccuWeather, music site Amie Street, job listing site Indeed, micro-messaging service Twitter and local listings portal Yelp. Each company will have its own scheme for building a helpful widget.

Kayak, for example, will respond to searches like “SFO to JFK” by providing a search box showing travel fares from itself and other travel sites. And Yelp’s widget will be able to return a result for “pizza near Sears Tower” with listings for pizza joints near the historic tower in Chicago, according to Wales, by using geolocation data.

“I think everyone will do this in the future,” says Wales of the widgets. It’s true that other engines, including Google, already do some similar things, although often from their own internal services. Google, for example, uses Google Maps as a widget within its own search results. But Wikia’s approach allows for more innovation, vetted by users.

Whether enough users exist to drive the process and prevent gaming, is questionable. Wikia is still in its very early growth stages; Wales says it only recently broke 100,000 searches in a single day. The total market sees around 40 million search requests daily, according to comScore’s statistics, excluding certain kinds of searches.

Wikia also recently added more editing features for users and the widget framework, which users can also use. The company is working on a back-end overhaul to improve the automated portion of its technology. 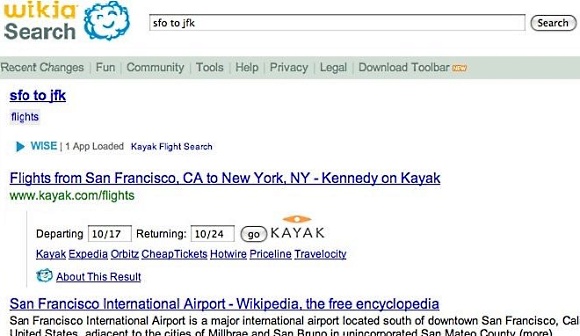