Browser extension Reframe It launches today, allowing users to take notes and make comments on the content of any website, and then share them with others — all within a slim sidebar located on the right side of every window.

Annotating the web isn’t a new concept by a long shot. Reframe It joins a crowded field of rivals like Fleck, Stickis and Diigo, which let users leave sticky notes with their comments directly on bookmarked sites, viewable by designated friends and groups. Plugin Trailfire lets you link and annotate sites with related subject matter. ShiftSpace does pretty much all of the above and even lets you edit a website’s source code. Not to mention Google Notebook.

So what makes Reframe It different? It’s the first platform to make mass discussion of webpage content possible, says founder Bobby Fishkin. The sidebar gives users a centralized “home base” for their comments and discussion that sticky notes programs just can’t provide, he adds. 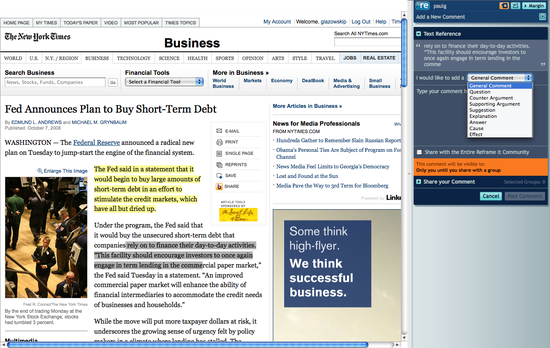 For any webpage, the sidebar maps out the locations of all existing viewable annotations (showing which images and chunks of text they are attached to), and allows an unlimited number of users to reply to previous notes. You can choose whether to see only comments made by certain groups or friends, and even set customized filters on public discussion. Fairly intuitive buttons also give you the option to keep an eye on a site for new comments and to follow your favorite users to see what they say next. Clearly, the service could be a huge boon for teachers trying to stir class discussion, but also seems streamlined enough to steal recreational web surfers from less organized annotation and social bookmarking apps.

San Francisco-based Reframe It received $700,000 in seed money from A D Gilhart & Co. and its founder in the past year, and is in the middle of a new round of investment. It hopes to raise $2.7 million by the end of first quarter of 2009.