European leaders agree on financial rescue plan — The move will involve the injection of billions of Euros into banks in Germany, France and other countries. It was spurred by a similar British plan announced last week.

Microsoft to release Silverlight 2 on Monday? — The company says it has “a significant announcement related to Microsoft Silverlight” coming at 9am Pacific time. Most likely, that means Microsoft has completed version 2 of its platform for web applications and media, according to All About Microsoft.

Will open source companies flourish in a recession? — They sure will, according to O’Reilly Radar’s Nat Torkington and The Open Road’s Matt Asay.

Mahalo gets more news-oriented — The new design of the “human-powered search engine” includes a way to liveblog the headlines as well as a “top news” box on the home page. 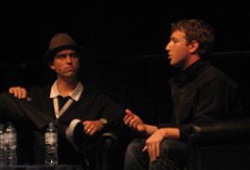 Mark Zuckerberg on “opening up” — Facebook’s chief executive says the social network is rolling out its data portability technology Facebook Connect more cautiously than Facebook Platform. Earlier this week, Zuckerberg raised some eyebrows by saying Facebook’s focus is on growth, not on making money.

Bush signs broadband data collection bill — Most of the actions required by the law have already been accomplished by federal regulators, however.