Have you ever been sitting at your computer, wishing you could listen to your music collection without being forced to open a desktop application? If so, Lala is launching just the thing for you.

Since the beginning of the summer, Lala has offered a service that lets you stream any song one time, then pay $.10 for the right to stream it as often as you want. The Palo Alto-based company has now convinced the major record labels and over 170,000 indies that it’s okay to let you access your music collection from the web. It’s releasing an application that scans the songs in your library, matches them to the six million legally licensed songs in its database and gives you permission to access those songs from Lala’s site or, with widgets, anywhere on the web. This is fantastic for all those moments you just can’t bear to use iTunes.

More seriously, Lala does have some very interesting potential. When the day comes that high-speed wireless connectivity is ubiquitous, its service could eliminate the need for music players with physical storage — though it’s hard to imagine that Apple won’t be right on top of this trend should it emerge. The company says that it will soon be opening up application programming interfaces (APIs) that will let developers build their own apps on its service. Because Lala’s licensing deals allow users to stream any song they want, it would be possible to create tools that, say, let music bloggers create playable links to songs. Readers who are also Lala users could then buy the rights to stream the song with one click.

This sort of ability, made possible by having a huge database of legally licensed songs in the cloud, gives Lala the potential to distribute its selling power across the entire web to almost every corner of music fandom. Whether consumers will take to the idea of owning songs that aren’t downloaded onto some physical medium has yet to be seen.

The company raised $20 million in October from Ignition, Bain Capital and Warner Music. 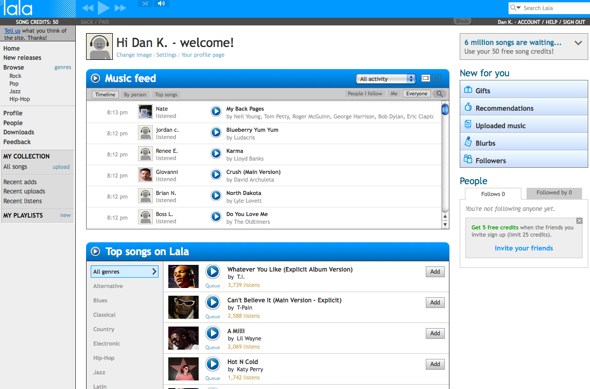