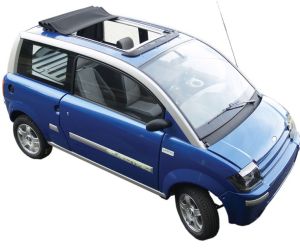 According to most experts’ expectations for electric cars, the vehicles will be fueled mainly by batteries. But there’s a dark horse competitor for energy storage: ultracapacitors, devices that store energy in an electric field. Three companies, Apowercap Technologies, Eestor and Maxwell Technologies, are looking increasingly likely to commercialize that technology.

The first, Apowercap, just received a funding commitment for between $5 and $20 million from an investment firm called EastOne Group, according to Dow Jones’ Clean Technology Investor. The money will help bring down the cost of the devices, the principal barrier to their use.

When ultracapacitors become cheap enough to be practical, one potential application is tandem use with a battery. Capacitors can absorb charge much more quickly than batteries, although they also tend to lose that charge more quickly, so they’re good for fast fueling. Green Light has some useful details on Apowercap’s plans in that area.

However, Apowercap is a bit behind Maxwell, which has recently signed contracts to install its ultracapacitors in buses made by large company Van Hool, as well as less-known Chinese company Golden Dragon Bus. It has also made deals to use the devices in lift trucks and for wind turbines.

As for Eestor, that company is also nearing a point where it can install its devices, according to a recent interview usually close-mouthed CEO Dick Weir recently did with the Cleantech Group. According to Weir, Eestor’s ultracapacitors have a discharge rate that’s slower than batteries, so they could potentially replace batteries entirely.

That’s good news for Zenn, a publicly traded electric car maker, because the company has been promising cars based on Eestor technology to investors for over a year. Eestor itself hasn’t been much help, though; the press-shy company has rarely spoken up for itself, and still won’t talk about potential applications.

Apowercap is based in Ukraine, although it is most likely to sell into markets and develop partnerships outside of its home country. Eestor is in Cedar Park, Texas and Maxwell is in San Diego, Calif.