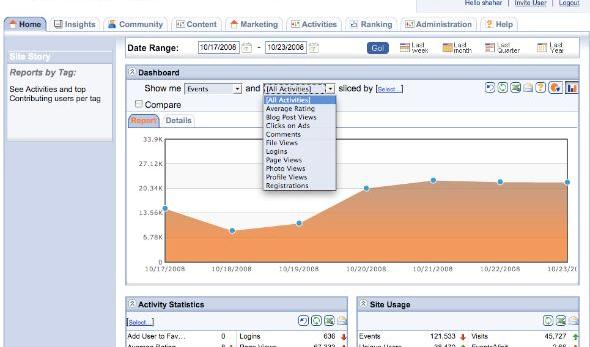 Nuconomy, a web analytics company that tries to measure every aspect of user interaction on a web site, is publicly launching its product today. The company goes beyond page views to look at things like comments, ratings, uploads, purchases, multimedia (like video views) and links you share with friends.

This way, a web publisher can more accurately identify audience members’ actions, and figure out how to make money from them — you can tell, for example, how much a particular ad or link is making. The company also tracks so-called user “engagement” on applications built on Flash, AJAX, and Silverlight technology.

The company has been in private beta since early this year, and it has been adding an impressive list of partners, including Microsoft, Federated Media, Pioneer, Six Apart and Technorati.

It also lets a publisher fine-tune which analytics they want to use NuConomy to focus on. As we wrote about the company in February:

NuConomy’s two-way API, however, is what draws the buzz. Rather than just receiving a report, site owners can decide on the fly what information they want, be it the relationship between the number of videos and of visitors, or between comments and purchases (see screenshot above). With just a few clicks, you can select different metrics and NuConomy will bring up a graph showing whether there’s any correlation. For example, Nechmad says, NuConomy could show you that a link from a specific site seems to be bringing in the most paying customers, even if it’s bringing in fewer users overall.

The service is free, although the company plans to charge clients once they hit a certain pageview threshold. This business model certainly seems promising during the current economic downturn, as the company helps clients make more money.

Rivals in measuring such details of sites’ user “engagement” include Collarity — although larger web analytics services like Google Analytics will certainly need to start fleshing out their features in order to stay competitive. VentureBeat, for example, uses Google Analytics and doesn’t have a great window into the data that these other services could show us.

NuConomy raised a first venture round of $3 million from communications giant WPP, and it has relocated from Tel Aviv, Israel to San Francisco.