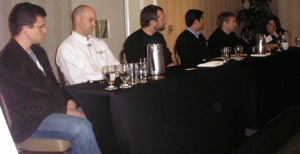 Everyone knows startups will have to make cutbacks to survive the coming downturn, but that’s not enough: It’s also important to look for new opportunities, even if that means completely rethinking your business model.

That was the big theme during the second panel at VentureBeat’s event on “How to manage your startup in the downturn,” where entrepreneurs such as Max Levchin of Slide, Jason Calacanis of Mahalo, Toni Schneider of Automattic and others dispensed wisdom. Given the broader economic climate, it’s not surprising that the mood got pretty glum — Levchin used the word “depression” several times — but the panelists seemed optimistic that the best startups will be able to thrive.

Schneider was the first to hammer home that the oft-repeated directive to “tighten your belt” is good, but that’s not enough for survival. Levchin also took up the theme, comparing layoffs to cutting off a finger — they might be needed, but they will make you less effective.

“A much better way to survive the downturn is to make more money,” he said.

Here’s how to think about it, Schneider said: Now that the external circumstances have changed, you need to ask how your company would be different if founded today. That’s where you need to be going.

The downturn also opens up some opportunities. This is actually a good time to be inventing things, Calacanis said, and also to hire — there are going to be a lot of talented people on the market, and they’ll probably settle for less money than a year ago. The crowd of “me too” companies will be disappearing, too, leaving a clearer playing field for the leaders in each market.

There was some discussion about making tough decisions — most obviously, layoffs. Calacanis, who recently announced cuts at Mahalo, said the lesson he took away from his past companies was to make all the layoffs in one swoop, rather than announcing small cuts again and again. If you get the bad news over with, your team has a chance to rebound.  Otherwise, you create “a whole culture of people waiting for the next ball to drop,” he said.

And what role will venture capitalists play? Moderator Kara Swisher of All Things Digital said it’s hypocritical for VCs, who previously encouraged growth and spending, to now push for cutbacks.

“It’s like drug dealers saying drugs aren’t good for you,” she said.

The panelists agreed that VCs who just go into panic mode and try to convince entrepreneurs to follow the latest trends aren’t going to be much help. Calacanis also said that VCs who claim that their firms are still “open for business” — in other words, that they’re still investing in new companies — are lying: “They’re going to focus on their winners.”

But VCs can provide valuable support, financial or otherwise. The best VCs stand behind entrepreneurs as they adapt to changing circumstances, even if that means completely revamping the company, Levchin said.

Swisher closed by asking each panelist for one final piece of advice. Here’s what they said: