San Francisco techies, are you sick of hearing that you’re destroying the city’s working class neighborhoods? Googlers are probably the biggest targets — their colonization of the Mission has spurred critical newspaper articles and hipster sidewalk graffiti — but it’s a charge that could be leveled at many startup employees, too. Well, salvation may finally be at hand.

There’s a fun new web application called Gentrify that can show users how much they’re going to drive up a neighborhood’s rent before they move in. Created by a team of developers for the Rails Rumble app contest, Gentrify is basically just a hobby project for now, though it could be expanded or monetized if there’s enough interest. It mashes together data from Craigslist, Yelp and Google Maps to “help the elite urban bourgeois find their natural habitats.”

Here’s how to use it: As with Craigslist, you enter the neighborhood and price range that you’re considering for your new apartment. Then, you can select the amenities that you’re interested in, be it “adult entertainment,” “Buddhist temples” or “coffee shops.” The relevant locations are displayed on a Google Map. When you see an apartment that seems to meet your needs, you can bring up additional Craigslist info. 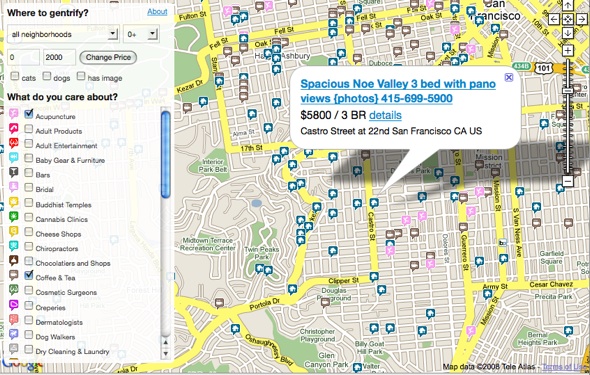 This is where Gentrify’s coolest feature comes in: It tells you how the listed rent compares to “what you should pay,” which is useful for bargain-hunting, and also to see how much you’ll be contributing to gentrification. Based on the amenities surrounding the apartment, it also calculates a “gentrification percentage,” so you can see how gentrified a neighborhood already is.

It’s all very tongue-in-cheek, and of course it doesn’t actually change the fact that gentrification is a real problem. But the data it provides is genuinely useful, whether or not this issue is important to you.