When the Android Marketplace (the place to download applications for the Google Android mobile platform) launched last week, things looked a bit sparse: There were only 62 applications available. It looked especially weak compared to Apple’s App Store, which launched with more than 600 apps early in the summer. But less than a week into the Marketplace’s existence, things are filling out, according to data from mobile analytics and advertising company Medialets.

By October 29, the number of apps in the Android Marketplace had risen to 167, nearly three times as many as there were at launch on October 25. But still a bit troubling is the fact many of the downloads — 73 to 83 percent — are driven by a mere 41 applications, according to Medialets data. 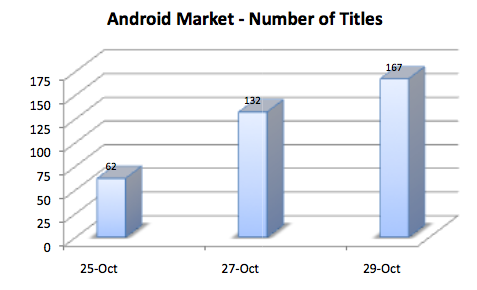 In terms of overall numbers for the whole marketplace, Medialets’ numbers are less clear. The company estimates that there have been between 667,000 and 2.9 million downloads total. Regardless, this number pales in comparison to the App Store, which saw 100 million downloads in just 60 days and 200 million in about 100 days. Extrapolated out, even on the high end the Android Marketplace would only have about 36 million downloads after 60 days, and 58 million after 100 days.

Of course you have to assume more applications will be added to the marketplace over that time and that should mean more downloads. Still, it will be hard to hit Apple’s numbers.