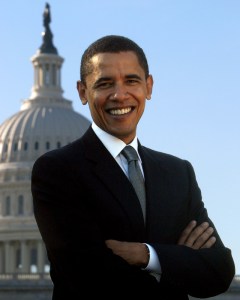 It’s barely 8pm, and all of the networks and CNN have called the election for Sen. Barack Obama. It’s very early for them to do so, but it happened all at once, just as the polls closed on the west coast. Enough electoral votes have stacked up in Obama’s favor for it to be clearly over.

John McCain delivered his concession speech before a despondent crowd in Phoenix. He said he called Obama to congratulate him. Obama told McCain that he needed his help because McCain was a leader on so many issues. McCain urged his supporters to get behind Obama for the sake of the country. As TV cameras panned, they caught a sad Carly Fiorina (the former HP chief executive who had campaigned for McCain) on camera. In Illinois, amid the victory celebration, the Rev. Jesse Jackson had tears of joy in his eyes. The 44th president of the United States will be the first African American elected to the office. President Bush also called to congratulate Obama.

Obama gave a rousing acceptance speech that asked Americans to join in service and sacrifice, and to overcome the nations problems — two wars and the worst economic crisis in a century — with a “yes, we can” attitude. 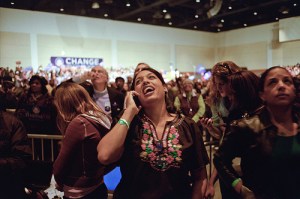 In other closely watched races in Silicon Valley, it appears that Proposition 8, against the legalization of gay marriage, is going to win. Meanwhile, the proposition to build a high-speed bullet train between Los Angeles and the Bay Area is going down in defeat is apparently headed to victory, leading with 52.4 percent of the vote, after 91 percent of precincts counted.

How do you think the next four years will turn out? Leave your comments here.
[youtube=http://www.youtube.com/watch?v=tQGsP8mnHsg&w=425&h=344]