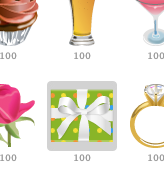 Christmas may come a little early for Facebook employees who own stock in their company. This summer, we learned the social network was planning a unique method of keeping talented employees happy before a surely-distant initial public offering. The company began the program on Nov. 1, we’ve confirmed. We also hear that LinkedIn has a nearly identical — if not fully identical — employee stock sale plan, but we don’t have more details on it other than what we’ve previously reported (and it may have been called off).

Facebook is brokering the employee stock sale program with third parties but won’t actually buy stock back itself, a source close to the company says. Facebook’s employee common stock has previously been priced at a valuation of slightly less than $4 billion. Separately, Facebook has apparently upped the common stock valuation by five percent, a source tells Silicon Alley Insider — putting the common stock valuation at slightly above $4 billion (apparently with a strike price of $9.27 per share, versus the prior round’s $8.90).

SAI hears from its same source that Facebook is making $265 million in revenue this year. Facebook’s fiscal year doesn’t close until the end of December, so that number is strangely specific given the present uncertainty about advertising spending and virtual gift revenue the company might bring in during the approaching holiday season. Also, $265 million is exactly how much eMarketer projected Facebook would make in U.S. advertising, in a study from last May.

We’ve heard from several sources over the last year that Facebook expects to make more than $300 million this year; the Wall Street Journal cites sources saying the same number, in an article today.

Facebook’s revenue this year will be about $265 million, the source says, which is less than the $300 million expected. The source estimates that this is composed of about $180 million of ad revenue, $50-$60 million of virtual gifts, and some smaller revenue items. (unconfirmed)

The number for Facebook’s virtual gifts revenue sounds generally right, given what others and myself have been hearing about that revenue stream. If so, then is Facebook really just making a total of $180 million off of ad revenue?

Sure, Facebook’s various experiments in advertising still haven’t made the company billions of dollars, despite the $15 billion preferred-stock valuation the company got last year (as part of a strategic investment by Microsoft). But Facebook overtook long-time leader MySpace in terms of worldwide traffic this past summer. MySpace has seen its traffic drop, yet it will near the $1 billion revenue mark this year, we’ve previously heard.

MySpace has focused on revenue while Facebook continues to focus on growth.

What to do with all that growth?

Questions around Facebook’s current and planned revenue will circulate until the company eventually goes public and officially releases that information. Today, for example, the Wall Street Journal article is the latest report to point out that large advertisers have yet to get excited about Facebook’s ad offerings. Fox Interactive Media, the News Corp. division dominated by MySpace, brought in 15.9 percent of display advertising spending in the U.S. in the month of June, according to an old comScore study, while Facebook was bringing in 1.1 percent — that percentage includes ads served by Microsoft on Facebook.

The reason is that Fox Interactive Media (mostly MySpace) has 87.5 million users in the U.S. — the world’s most valuable display advertising market — while Facebook has 41.5 million, according to comScore’s monthly web traffic report from September. (Note: Comscore seems to generally overcount social networking site traffic. For example, Facebook says its internal numbers show 120 million monthly active users worldwide, while comScore says it has more than 160 million).

Facebook, however, has big growth in smaller but still-lucrative markets like Canada, the U.K, and Asia. Maybe it can monetize all that traffic? Today, it’s announcing a licensing deal with Asia-focused ad agency ihub Media for direct ad sales in Singapore, Malaysia, Indonesia and Taiwan, in an effort to do just that. 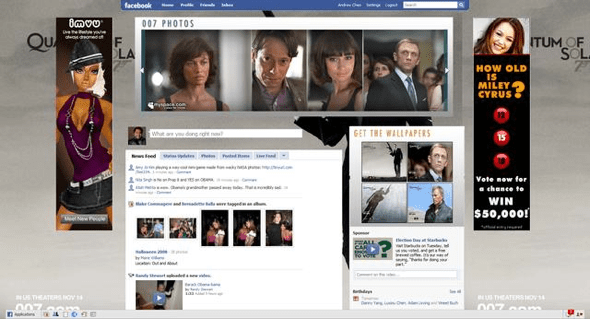 MySpace has been busy selling display ads on its homepage and other key locations, something Facebook has studiously avoided. Instead, Facebook has experimented with a wide variety of other ad formats, including ads that appear in users’ news feeds and along the left-hand side of the site. These ads can include ways for people to interact with them — by following a link to become a fan of a product’s official Facebook page, for example. It’s not clear how much money these “engagement” ads are bringing in, with the latest version featuring new interactive features only being launched in August.

Speculation has already begun as to how Facebook could make money off of display ad revenue. What would a money-making display ad campaign on Facebook look like? Like MySpace? Andrew Chen, a serial entrepreneur with a background in advertising technology, created the mockup of a banner-filled Facebook, above, to show what that might mean.

Even if Facebook makes that $265 million this year, it does not mean shares in the company are a lot closer to worthless. It has been holding operating costs down as it prepares for the long haul, we’ve heard, through doing things like building its own servers. Meanwhile, as the blog AllFacebook recently examined in detail, Facebook may be rolling out a targeted ad service that works across the web.