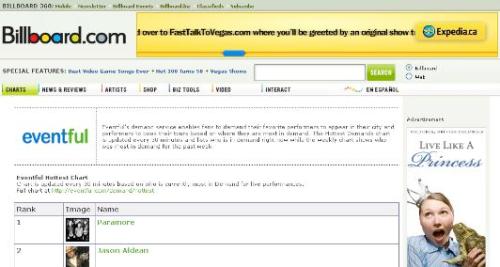 Eventful, which lets user discover, share, and request events specific to their location, will add the ‘Eventful Hottest Demand‘ and ‘Eventful Weekly Most In Demand’ to Billboard.com’s famed Top 100 lists. The Hottest Demand list is based on Eventful’s Demand service, which lets user’s vote on which performer’s they’d like to play in their locations. The Weekly chart will rank performers by the number of demands received from 12:00 a.m. Sunday through 11:59 p.m. the following Sunday.

Billboard is close to celebrating its 115th birthday, after positioning itself as one of the world’s leading resources of music news. Eventful’s charts will provide a near real-time popularity check for comparison to Billboard’s charts, allowing viewers and performers insight into who consumers want, and where they want them.

Eventful currently has over 8 million registered users and has become a force to reckon with in the local events space.  Just last month the company announced a Ticketmaster partnership and $10 million in new funding led by Telefónica Capital.