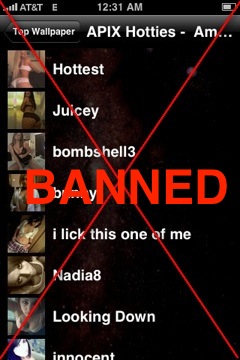 Yesterday, I expressed surprise that Apple would allow Wallpaper Universe, an iPhone application with racy pictures, to get into the App Store. Sure enough, today, it’s gone.

The removal once again calls into question Apple’s application reviewing process. Apps such as Google’s new brilliant voice search application get delayed because of the process (which, despite some conspiracy theories, is what Apple confirmed happened), but apps like Wallpaper Universe still manage to get through only to be pulled hours later. I have to wonder what exactly Apple is looking at/for while assessing apps.

To be fair, hundreds of apps (if not more) get submitted every day for approval, but Wallpaper Universe should have been an extremely easy one to reject. (Certainly easier than say, a podcasting app that had already been in the App Store but got rejected for an update.) It had one screenshot filled with girls in their underwear striking seductive poses. While I may personally have nothing against that, Apple has said it would keep this kind of material out of the App Store. And it seems like it would be hard to find a more obvious example.

While some don’t like the fact that Apple has approval rights for what apps make it into the store, I’m fine with it — it is their store after all. I just think the process should be more transparent and less porous considering the lengthy approval times.