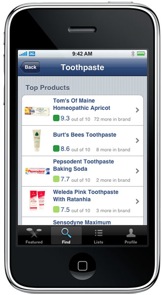 The best iPhone application that I’ve downloaded in the last few weeks is the mobile version of GoodGuide, the site that aggregates data about whether a product is safe, environmentally friendly and ethically manufactured. It’s already pretty useful as a web site, but becomes indispensable once it’s on your phone. With the app, you can access GoodGuide’s data when you’re actually shopping in the store, and the slick, easy-to-use interface doesn’t hurt, either.

I speak, of course, of holiday shopping. Right now, San Francisco-based GoodGuide focuses on personal care and household chemical products. At any other time of year, that would seem like a smart place to start. Unless I’m mistaken, however, the biggest thing on many people’s minds right now isn’t what kind of detergent they’ll use for their next load of laundry, but rather their Christmas shopping list, which the site’s current listings are poorly-suited for. I don’t know about you, but most of my friends and family would be less-than-thrilled to receive a bottle of shampoo.

GoodGuide is such a compelling concept, especially as a mobile app — I really want a simple way to make sure how I spend my money matches my values, and so do most of the people I know. That’s why it’s such a shame that the GoodGuide app will be next to useless for my gift-buying. For now, I’ll have to content myself with perusing the startup’s data on which companies donated to which political causes and candidates.

The company says it plans to expand to other areas, including food, toys and electronics. It’s not easy compiling all the data GoodGuide provides (that’s why the expert judges were so impressed when the company launched at the TechCrunch 50 conference in September), so I wouldn’t expect the company to just slap together a section on electronics, for example, in order to have something up by Black Friday. The limited focus is understandable, but it’s still disappointing.

Lucky for GoodGuide, I put off all my holiday shopping until the last minute, so the company still has a few weeks to get it together. And hey, if they don’t add those categories by Christmas, there’s still another two weeks until my birthday.

Update: Chief executive Dara O’Rourke emailed me to say the GoodGuide team is working to address these issues. Toy ratings should be available on Dec. 10, with food coming after the New Year, and electronics scheduled after that. So if you’re planning to give a lot of toys as gifts, and if you care about ethics/safety/the environment, you might want to hold off your purchases for a couple of weeks.