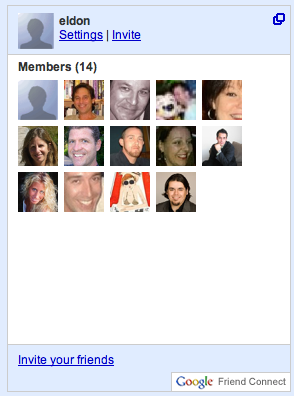 Social network Facebook has been slowly rolling out its new service, Connect, over the last few months. The service lets users sign in to other sites using their Facebook identities, find Facebook friends on those sites and share information from those sites with the rest of their friends back on Facebook’s home site.

Google now appears to be busy trying to steal a little thunder. It offers a competing initiative, called Friend Connect. Web publishers have been receiving invites to test the service out on their own sites for the past day or so, according to a large number of developers and web publishers who are talking about it on Twitter.

The invites come as Facebook increases the drumbeat of press announcements about Connect launching on new sites. Last month, we previewed Connect’s implementation on local review site Citysearch, for example.

I’m not holding my breath for Google’s Friend Connect’s rollout, though. Facebook’s Connect is built around integration with the news feeds on its home site — the one that has more than 125 million monthly active users. With Google’s Friend Connect, you sign in to Friend Connect on a partner site using your Google user profile or your Orkut (the social network that Google owns) profile, or your Plaxo profile. You can see connections from these sites on sites that use Friend Connect. Google’s user profile, however, is extremely minimal — and not a social network, because there’s no central place where you can send your activities back to.

That’s because Google doesn’t have a central social destination, in the first place. It has services with social features, like instant messaging in Gmail, but Gmail is an email application, not a social network. Google does have Orkut, but Orkut is only popular in a few countries, and the U.S. is not one of them. Google simply doesn’t have a place to drive two-way interaction between a home site and partner sites.

There are other, older rivals that have tried to create loose networks of friends distributed over multiple sites. The Yahoo-owned MyBlogLog is one example — to my knowledge, it doesn’t have significant traction.

The other potentially significant rival, though, is social network MySpace. It offers what it calls the Data Availability Initiative — developers I’ve spoken with have criticized it for being hard to implement. It also has not, to my knowledge, gotten significant traction. MySpace isn’t as focused on the concept of news feeds — streams of data about your friends, that are very prominently featured on Facebook. These news feeds are ideal for Connect, because it gives other sites easy access to Facebook users on its home site.

All three services were announced this spring, but have been slow to launch. Indeed, Google originally announced that it would let you sign in using your Facebook identity — but Facebook quickly blocked Google’s access to its users on that front. MySpace is also not giving Google Friend Connect access to its user data.

Bigger picture, it’s not clear if users will actually use any of these, but based on Facebook’s popular destination site and its focus on feeds, I think it’s still the front runner.