Socialmedian, a site where users can share and discuss news stories with their friends, has quietly taken the “beta testing” tag off its site. It’s an important milestone that the company announced without much fanfare, either in terms of press coverage or new features.

Still, it’s a sign of how far Socialmedian has come in a few months. Although I liked the concept, I thought the site was pretty underwhelming when I checked it out back in May. And every time I’ve spoken to founder Jason Goldberg (who previously cofounded Jobster), he emphasized that Socialmedian was still evolving rapidly from the initial site, which was built in just a few months. Now that Socialmedian is officially out of beta testing, we can judge the site for what it is, not just the potential that Goldberg kept hinting at.

So how does Socialmedian stack up? It’s certainly added a bunch of new features since I first logged on, with a range of ways to follow news shared by friends or by “newsmakers” and to share that news with sites like Twitter. To be honest, I’m not seeing anything that will tempt me away from social messaging/sharing sites like Twitter and FriendFeed, or the sharing option within (the newly redesigned) Google Reader. Still, it looks like there are plenty of other users who felt differently: Socialmedian’s traffic has been growing steadily, according to traffic data from Compete, and Goldberg says additional publicity tripled the site’s traffic between October and November. That doesn’t put the New York- and Pune, India-based company in the neighborhood of Twitter, FriendFeed, or news site Digg yet, but it’s still pretty impressive.

Since Socialmedian isn’t unveiling any new features right now, I had to wonder what triggered the change. Goldberg says “everything is clicking very nicely,” and that he wanted to take the beta tag off in advance of some announcements in the coming weeks: a “news flash” feature, a new home page, and unspecified “other big and exciting developments.” I’m curious what those other developments will be — perhaps Goldberg wanted to take the site out of testing before making a business deal? With social sharing site Pownce acquired earlier this week, commentators like Allen Stern are wondering if other sharing startups are next.

Socialmedian has raised less than $600,000 from the Washington Post and individual angel investors. 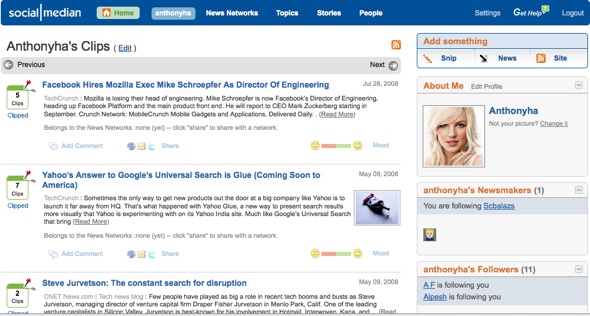