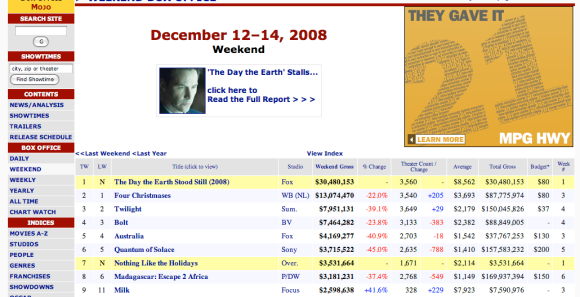 As someone who studied film in college and worked in Hollywood for a few years, I don’t get to incorporate that old life into my new one as a tech writer as much as I’d like. So it brings me joy when I get to report that two of my favorite movie web sites are combining forces: The Internet Movie Database (IMDb) and Box Office Mojo.

Technically, Amazon, which owns IMDb, acquired Box Office Mojo sometime during the third quarter (which ended Sept. 30), but Variety is just now reporting the transaction. Terms of the deal were not given.

The reason why these were two of my favorite movie sites is because they both served a different purpose. While the IMDb is a great repository for films and film credits, its box office data has always been severely lacking. Box Office Mojo on the other hand, was absolutely great at getting that box office data and analyzing it. I particularly like their list of the top grossing movies of all time adjusted for inflation (hint: Titanic is not number one, not even close).

While both are expected to exist as separate entities, they will share data, which will make each site better.