Facebook wants to let its users freely listen to and share music — and it’s considering a partnership with music site Lala to help it do so, industry sources tell us. Lala’s model, though, doesn’t exactly fit what Facebook has had in mind. Facebook originally envisioned offering unlimited streaming music to its users, comparable to MySpace Music — and Lala doesn’t provide that. Instead, the service lets you listen to a song for free once, then choose to buy it or otherwise listen to a 30-second clip.

The prominence of Lala at this point in the planning stage — if my sources are accurate — makes me wonder if the whole idea of Facebook “Music” is headed for the dustbin.

This summer, Facebook approached a handful of online music companies with a “Request for Proposal” about how they might integrate streaming music into Facebook. Companies that received RFPs included Last.fm, imeem, Rhapsody, iLike, Project Playlist and Lala. Third parties, led by iLike, had already built relatively comprehensive music applications for Facebook users. Only imeem (and MySpace Music) has a license from record labels to let users do things like create and share free playlists of complete songs. The RFP stated that free streaming music was a “must-have.” 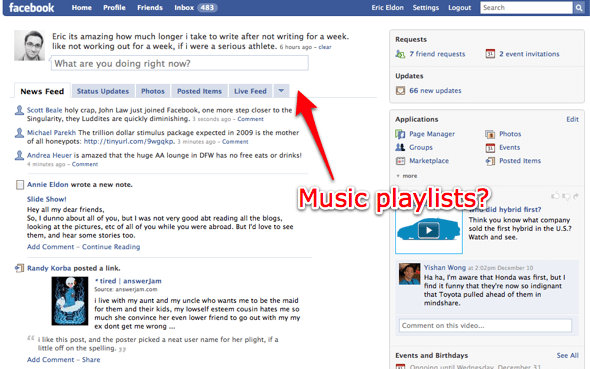 Unless Lala has worked out some as-yet-unannounced way to stream unlimited music, its service doesn’t seem like a great fit with Facebook, especially considering that iLike already lets users create and share music in limited form. Indeed, choosing a specific partner for music conflicts with Facebook’s previously-stated goal of letting developers build their own applications on a level playing field; Facebook’s music service would surely be featured more prominently than other applications within the site interface. (See my recent report on Facebook’s platform for more on that issue.)

So, why the lack of enthusiasm among the other music companies that received the RFP? Sources say Facebook doesn’t have a clear revenue stream planned for the service. These other companies have tens of millions of users. They’ve worked out various methods of coexisting with labels including various licensing agreements. They have other means of making money that they’re busy working on. And they have ownership issues. Rhapsody, for example, is co-owned by Viacom’s MTV, not a close friend of Facebook. Any deal with Facebook increases the risk that the labels will force them — and Facebook — back to the negotiating table to work out a more expensive relationship.

Licensing issues, like lawsuits from record labels, are likely on Facebook executives’ minds these days. Last week, major labels Warner, EMI and Universal Music Group sent out cease-and-desist letters to MySpace and Facebook, telling the companies to remove an application made by Project Playlist. The accusation was that Project Playlist had failed to stop its users from illegally uploading and sharing copyrighted music. Facebook removed Project Playlist earlier this week.

Lala, though, is small. It has launched three times already with various business models — to rave reviews — but it has yet to demonstrate significant traction. So a deal with Facebook holds more upside and less risk for Lala than for larger rivals.

For its part, Facebook responded to my query about this article with the following:

We don’t have more to add than what we’ve said previously. Clearly, the music vertical is an edge case with a lot of complexity around rights and licensing. And music is an area where it would make sense to partner with a company that can bring relevant expetise to deliver an experience to Facebook users that we cannot. We’re not going to confirm discussions with specific companies, but we will continue to explore the various options.

So nothing’s decided. Lala may drop out, a new partner may rise, or Facebook may decide to build a music service on its own — or kill the project entirely.