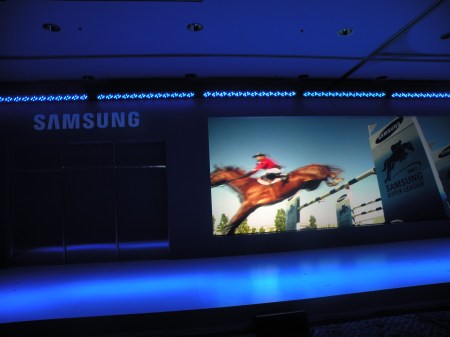 Samsung Electronics is diving into connected TVs just like the other big companies that have made presentations today at the International Consumer Electronics Show (CES) in Las Vegas.

Samsung said it will team up with Yahoo to deliver TV Widgets and other web applications that run on TVs. (Notice that nobody is teaming up with Google on this front.) The widgets are compact apps that let you interact with your favorite web sites via remote control. They deliver things like local weather or communication with your friends.

Yahoo vice president Patrick Barry demoed the user interface of the Yahoo Widget Engine, which Samsung is using. He said it lets TV viewers access the best of the web. It looks pretty cool as long as it works as quickly as advertised on stage. Samsung also has alliances with Pandora and Netflix.

The Korean giant is also touting full wireless HD video transfer technology for the living room between devices such as Blu-ray players and cell phones. The company is still part of several wireless networking consortia, including WirelessHD and others. 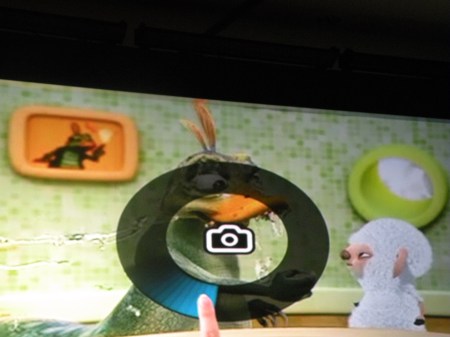 In the name of simplicity, Samsung will employ a single user interface across many of its different products, starting with a new line of digital cameras this year. On a cell phone, for instance, you can customize your screen to include your own preferred widgets. Many of the user interfaces will have touch screens in the future.

On the eco-friendly front, Samsung said its line of new Luxi LED 6000 line of TVs will use 40 percent less energy than past models. The LED 7000 will have a bunch of connected Internet experiences using the Yahoo platform, including auction-tracking from eBay, photo sharing from Flickr, and news from Yahoo. You can also use it to download movies. 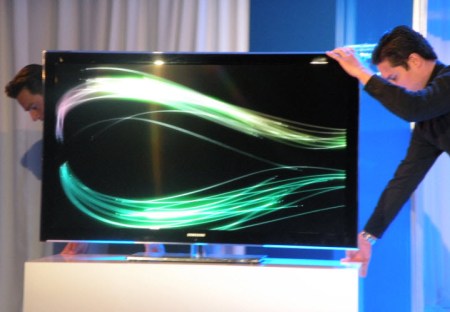 As with the LG TVs, Samsung will have thin models as well as TVs with 240 Hertz refresh rates, or four times the refresh rates of TVs of two years ago. That reduces motion blur in fast-moving scenes. Samsung will also have 3-D glasses for stereoscopic 3-D TVs and Blu-ray players that are Wi-Fi enabled.

Last year, Samsung actually showed up with some cool technologies. At that time it gave the first demo of mobile digital TV, where you could ride a bus and still maintain a connection to a digital TV signal. In the past three years, Samsung has had the No. 1 market share in TVs. Watch out, Sony.