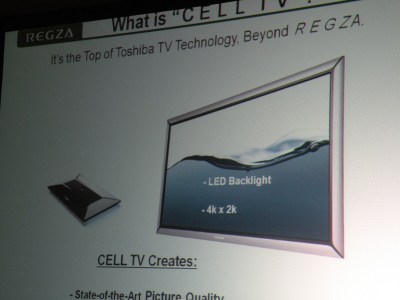 In a bid to move to the high-end of high-definition TVs, Toshiba will introduce a new series of TVs in 2009 that feature the Cell microprocessor developed by Sony, Toshiba and IBM.

The Cell has a bunch of processors on a single chip and serves as the heart of the PlayStation 3 console.

The company calls the new technology Cell TV and is showing it off in its booth. Scott Ramirez, vice president of marketing at Toshiba America Consumer Products, said that the new TVs will be able to display in 4,000 x 2,000 pixels, or at least twice the resolution of today’s 1080p high-definition TVs. The 4K x 2K resolution is widely viewed as the next step forward in visual quality after HDTV. It may not take off for years.

Toshiba will have to demonstrate the need for Cell processing, which in the PlayStation 3 has as many as eight functioning processors on a single silicon chip.

This shows that Toshiba, for one, isn’t giving up on the original Cell dream. While Sony sold off its Cell chip business to Toshiba, the original idea was to use the Cell across a bunch of consumer electronics devices where video processing was key. The Cell’s biggest success has been in the PS 3, which has sold more than 17 million units.

But Sony’s dream for the Cell was much bigger. Most other TV makers use their own chips or those developed by video processing specialty companies. The idea behind Cell was to get rid of all of the other custom chips and have Cell, whose number of processors depends on the application at hand, replace them.

Richard Doherty, an analyst at Envisioneering Group, said that there is a lot of Cell derivatives are in development. IBM is working on a previously announced 32-core Cell microprocessor.

In other news, like LG, Toshiba plans to introduce Internet-connected TVs later this year with Yahoo TV Widgets built into them. Overall, the company believes 23 million liquid crystal display TVs shipped in 2008, and that number will be up 5 percent to 24.1 million in 2009. Toshiba said it moved from four-percent market share in the U.S. LCD TV market a year ago to 10 percent today. On average, a 52-inch LCD TV cost $1,948 in November, and very few TVs are now sold above the $2,500 price.