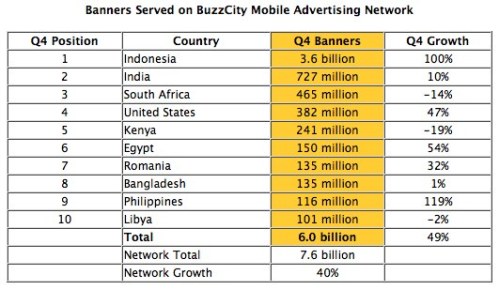 BuzzCity, one of the largest mobile ad networks in the world, released its fourth quarter traffic numbers last night. The Singapore-based company, which until recently has been most successful in Asia and other parts of the world, is also seeing an uptick in U.S. traffic. It served 382 million mobile banner ads domestically over the course of the quarter, a 47 percent increase over the previous quarter and a 209 percent increase for the year. It’s the latest sign of health among mobile ad networks.

While still smaller in the U.S. than rival AdMob, both companies are continuing to grow here and elsewhere. See the BuzzCity traffic table for more. AdMob, which reports its traffic using different measurements than BuzzCity, had 2.9 billion U.S. requests for ads in December, a 45.8 percent increase over the previous month (get its full report here).

So, although apples-to-apples comparisons between mobile ad networks are still difficult in this emerging industry, BuzzCity’s stats provides more evidence of overall mobile advertising growth, even if the evidence is only circumstantial. However, there has been an industry debate in recent weeks as to what extent everyone is suffering from recession-driven spending cuts. A week ago Mobile Marketer ran a bullish interview with Paul Palmieri, chief executive of Millennial Media — a main rival to AdMob and BuzzCity. “We at Millennial Media have experienced incredible growth over the last six months, with a busy pipeline and mobile ad campaigns on the rise,” he claimed. We’re also staying positive: “For now the upwards trend in mobile display advertising has a good shot to continue next year behind the industry’s increasingly good fundamentals.”

On the other hand, Advertising Age recently covered the trend of dropping cost-per-impression mobile ad prices, due to the amount of mobile advertising inventory increasing faster than demand. Inventory is growing because more and more mobile sites are looking to monetize via advertising as the mobile web becomes more popular. It remains to be seen if advertisers will make use of this inventory in the coming year. For now, at least, falling demand is only speculation among experts.

Matthäus Krzykowski contributed to this article.